Barban – Barbana: “The race of the ring - established in 1696 by family Loredan”

Barban was a fortified village in the Middle Ages but there are only few parts with remains of the town walls. The first part of the walls is the rectangular defence tower you have seen and the other two parts of the walls are the big gate and the small gate.

The rectangular defence tower is currently 10 meters tall and in the Middle Ages was 15 meters tall. In the past the tower was used also as prison. Driving with the car around Barban on the road that continues towards Labin you will note parts of the foundations of markedly large town walls. 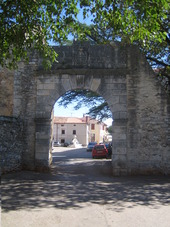 The big gate that are located near to the defence tower were built in the 16th century. Above the gate you will note the stone made coat of arms of the family Loredan.

When you pass the gate, the first and also the most interesting building in Barban is the building located on your right side and in part is the Parish Church of St. Nicholas with a 25 meters high bell tower and in part is Loredan’s family palace.

This large building was a fortress whose northern part was adopted at the beginning of the 18th century into the large one-naved Parish Church of St. Nicholas.

The bell tower was built upon the Medieval tower. 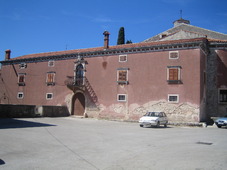 The Loredan palace has an inscription with the year 1536 that could mean the year when the family Loredan bought the palace.

Some other sources tell us that the palace was probably completed in 1606 through the adaptation of the eastern part of the fortress.

The Parish Church of St. Nicholas was built in 1701 on the place of an older Romanesque church. It hosts several interesting art works like: the altar paintings made by the student of Palma il Giovane, a stone baptismal font, a Gothic holder from the 15th century and the wooden statue of St. Nicholas. These are only some of them.

On the right side of the façade of the Parish Church you will see a very nice porch on the first floor with double stairs that were part of Loredan’s family palace. To see the main façade of the palace you have to go all around the church because the façade looks towards the main square that is located right on the opposite side. 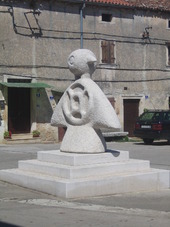 On the northern wall of the Parish Church you will note the round tower of the palace.

In this square there is also “The ring” stone sculpture made by J.Diminic in honour and as symbol of “The race of the ring”.

The façade of Loredan palace is very simple with a nice balcony in the middle of it and symmetric windows on each side. It’s clean lines and simplicity recall the Renaissance features.

In the southern part of the square and near to the Loredan palace there is also a well. 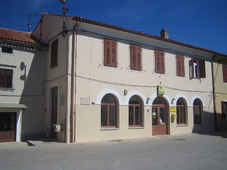 Opposite to the well you will see the Venetian loggia from 1555 that is used today as the Post office. The first floor hosted “fondaco”, the granary storage house. If you take this side, and follow the street that goes towards east, you will arrive to the place where “The race of the ring” is held.

It is a nice road to take a walk and enjoy the views towards Barban surroundings.

To visit the last smaller church that is located inside the old town walls perimeter you have to turn back where “The ring” sculpture is placed and take the only street towards north till the limit of the town.