Rakalj is a very old settlement like most other Istrian towns and villages and to visit the ruins of the old castle that existed in the Roman times and the Church of St. Agnes that was built in the 1495 you need to ask people from Rakalj to indicate you the road. 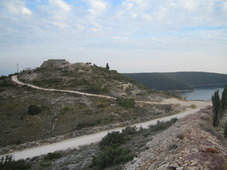 It is a white country road that you have to take outside the village. You will pass nearby the ruins of the Church of St. Cross. The castle is placed in a lovely place on a hilltop and once you arrive near this old castle you will enjoy a beautiful view towards the Rasa Bay and Labin area.

In Rakalj’s photo gallery you will find several pictures of this Istrian village placed not far away from the beautiful nature and very nice sea view.

The part of the village where Loredan Palace and Mate Balota house is located is relatively recent and is mentioned for the first time in 1190, while the old castle, few kilometres far away from the village, dates back into Roman times.

In reality the place where the old castle was built was probably a prehistoric hill fort settlement. Rakalj belonged to Labin until 15th century and in 1536 passed to Loredan family, together with Barban.

The location where the village is located today was named in a document from 1508 Castel Novo and Rachel. As written before, the ruins of the old Rachele or the old castle are located two kilometres on the east of the current village.

In 1312 Rakalj, the same as Barban, belonged to Pranperg family and in 1374, when the Count of Pazin Alberto IV died, the village passed to the Austrian Hapsburg family.

At the time the name was changed in Ragkl, Rekel, Rachir and Roegkl. Over the time Austrians gave Rakalj to various Lords such as: Lazzaro de Belli (1453), Lorenzo Bonomo (1478), Andrea from Krsan in 1497 obtained fishing rights in the area and in 1504 Zanetto de Tassis made a loan to Hapsburg family and obtained as guarantee Rakalj and Barban.

In 1508 Venetians entered into war with Austria and Rakalj was occupied for a year. Few years later Venetians occupied again the village and in end in 1535 Rakalj passed together with Barban to Venice. The year later, three brothers: Leonardo, Lorenzo and Francesco Loredan bought Barban and Rakalj. Loredan family will remain the lords of Rakalj until the fall of Venice. At the end of the 17th century, one-third of the feudal rights will be sold to the Venetian family Giustiniani and they will hold this rights until 1848.

After the fall of Venice in 1797, Rakalj was part of Austrian Empire and for a short period of time was under Napoleon domination.