From the seaside you will also see the Fisherman round defence tower from 1437. 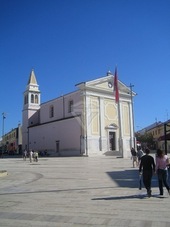 Following this only street you will arrive to a large square where on your left side you will see a relatively recently built big Church of Our Lady with its neo classical façade that dates back into 1770.

If you take the street that starts on the opposite side of the church’s façade you will take the direction that goes towards Decumano street.

Before you enter the Decumano street you will note the Pentagon defence tower that dates back into 13th century and was restructured in 1447 by Giovanni de Pari.

In the Middle Ages Porec was surrounded by defence town walls and had several defence towers. Few of them have been preserved till the present days.

If you look towards the top of the Pentagon defence tower you will note a stone sculpture of the Lion of St. Mark that was made by the son of Giovanni de Pari named Lazzaro. Below the Lion there is another coat of arms dedicated to Podesta’ Nicolo’ Lione.

The narrow street on your right side will bring you near the second round defence tower from 1437, named Fisherman defence tower.

Fisherman defence tower was built by Podesta’ Francesco Bondulmier as proved by the coat of arms placed on it. Nearby this defence tower you will see parts of the very impressive old town walls.

On the other side of the round defence tower, near the sea, you can enter the old town and follow the street on your left side that will bring you to Decumano street. Current street level is about 50 centimetres above the old Roman street level.

Decumano street has several Gothic palaces that are among the most beautiful Istrian palaces of that time and this street is very similar to those you can find in Venice. 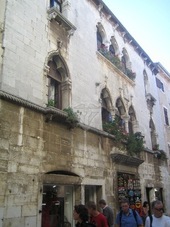 If you like pretty things you will note each valuable façade very easy.

The first one that you will note have three gothic windows, Venetian “trifora”, on the first and second floor. This building is located on the left side of the street and it is the former Lione family house or former Gonano – Parisi family house from 1473.

Always on your left side you will note the Baroque palace that belonged to the family Sincic and today it houses the Museum of the Porec region. This building dates back into 1729 and the museum was founded in 1884. 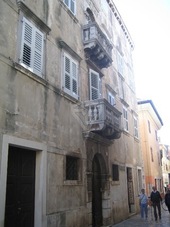 This was the first Istrian Museum. It store the findings from the archaeological site Picugi, the prehistoric hill fort settlement, and also a collection of portraits of the Istrian Carli family from Kopar.

Few meters from there on the left side of the street there is a house with Venetian “bifora” on the first and second floor and this was former De Cleva family house.

At the end of the street you will see a large square. In this place Decumano street cross with Cardo street. Cardo street today have another name. In this area there are many beautiful Venitian houses all around the square and its corners.