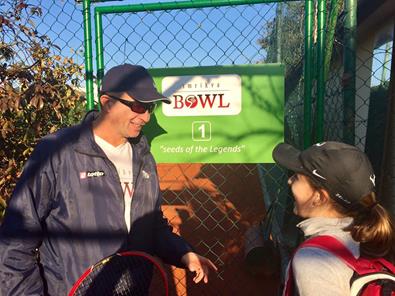 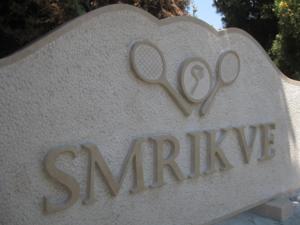 In September 2009 I attended PTR International Certification Workshop… and as the ancient Greek Plato said “the beginning is the most important part of any work”… Confucius, at the same time, on the other part of the Earth noted how “a journey of a thousand miles begins with a single step.”… :) 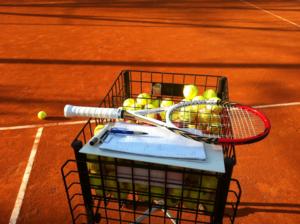 both of them are inspiring quotes and my dedication to this little school is driven by the above… many books read, videos watched, dedicated hours and courses followed are behind… and I am pleased to share a thing I belive in and that was added to the name of the school… 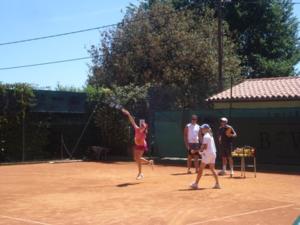 WHY LA BOTTEGA IN THE NAME…

Inside La Bottega we can imagine pupils, still children, that began to take their first steps into the world of art… growing their talent side by side with the greatest artists that later on made history…

La Bottega was managed by a Master who was setting the work commissioned… which, in end, has been completed by students dividing the work according to the abilities… 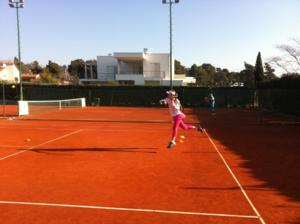 • Smrikve was always envisaged as something more than tennis (library, culture, olive oil and wine,…)

210 + SB players received scholarships to study & play tennis for the US Universities.

• in end, the same as in La Bottega, in our tennis school the older students (competitors) are trained to help the younger in their growth… thus knowledge sharing at all the levels is another of the pillars of La Bottega philosophy :)…

Our school is particular… and in the following you will find few details more about it… ;)

Thanks to the passion towards youngest players, that for sure Smrikva Bowl helped to grow over the last 25 years, the Smrikve Tennis Club is dedicating major attention to the youngest tennis players.

The Smrikve Tennis School (La Bottega) aims to provide our school members with the best existing knowledge and methods developed for instructing younger tennis players in their overall growth.

Usually, the kids that are involved in sports activities or in music learn to efficiently allocate their time. Kids learn to become responsible individuals and this could be very important for any professional activity they may decide to pursue in the future.

In particular, in the tennis game there is a need to solve problems individually and it is a good way to develop good habits and also have fun. 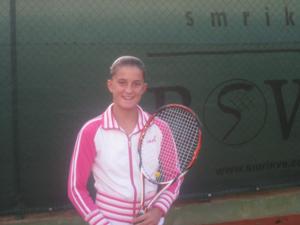 Tennis is a lifetime sport from which all age groups find personal enjoyment, opportunities to mix with others socially, as well as the health benefits of vigorous exercise.

Smrikve coaching model is designed to introduce young children and also adults to the joys of playing tennis and to encourage them to fall in love with the game.

Miodrag Bozovic (Mimi) and Tomislav Bozovic (Tomo) are currently dedicating most of their time to teach kids more about tennis and sport in general. 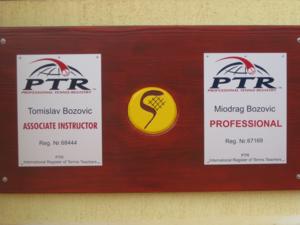 Mimi and Tomo are both members of the largest global organization of tennis teachers and coaches named PTR – Professional Tennis Registry.

Miodrag Bozovic – Mio is native from Pula (Pola) – ISTRIA (Croatia) where he completed Scientific High School and Conservatory of Music. He studied accordion and learned to play the guitar and piano on his own. Thanks to music he started to travel abroad.

After high school completion, he lived for 15 years outside ISTRIA, mostly in: Milan, Barcelona, New York and Turin.

During that period he graduated in Business Administration at BOCCONI University (Milan) and in Political Science at Universita’ degli Studi di Milano with focus on International Relations.

His professional experience includes 9 years of M&A (Mergers and Acquisitions) experience in the Investment Banking Industry in prestigious Financial and Advisory Institutions such as: KPMG, JP Morgan, Citigroup, Banca IMI and Union Bank of Switzerland (UBS).

In 1996 he founded Smrikva Bowl and in 2002, jointly with Maureen Connolly Brinker (MCB) Tennis Foundation, Mio founded “Little Mo”/Smrikva Bowl – the first ever under 10 international tennis competition between the US and Europe. Today Smrikva Bowl is considered one of the most important under 10 tennis tournaments in the World. 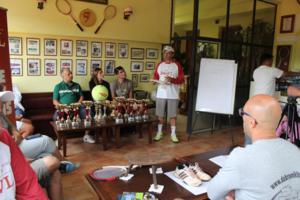 Today he is dedicating his time with passion to Smrikve, Smrikva Bowl organisation and to the youngest tennis players development.

Most of his tennis time he is dedicating to coach his nice Tara Sladakovic and since 2020 also Tara’s brother Stefan Sladakovic. Tara started to train tennis in December 2014 being 9+ years old and her best rankings as of June 2020 are the following: 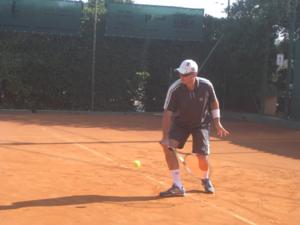 Tomislav Bozovic was outstanding in gymnastics when he was younger and has dedicated many years to teach generations of pilots how to fly supersonic planes.

Today he is dedicating his time with passion to the youngest players that are willing to learn the basics about tennis and, what is even more important, to learn the values that sports transmit to people in general. 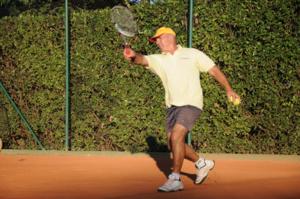 The additional talent resource we leverage in Smrikve is Miro Hrvatin (coach). His best ranking was # 2 in under 18 age group in Croatia and #4 among seniors. For two consecutive years he was member of the winning team of the first Croatian National league and played Oberliga in Germany.

• teaching to become responsible individuals via tennis game,
• developing good habits via self respect, respect for others and respect for rules,
• leverage the Smrikva Bowl network to allow the growth of the potential professional tennis players.

Luca Appino is a long term Smrikva Bowl friend and Golden Honorary Member since this title was established. Luca was for many years Babolat Director Of Sports Marketing and contributed to built up Babolat from a string company to one of the largest racquet manufacturers in the World. He is also credited for signing contracts with players such as Rafael Nadal, Andy Roddick, Kim Clijsters, Dinara Safina, Carolina Wozniacki, etc.

In 2009 Luca Appino decided to start, in collaboration with Toni Nadal, to share his experience through TENNIS TALENT TT Path to Success Program. The main service is focused on helping junior talented players and their parents in building their professional tennis career.

The first Tennis Talents program with focus on the Pillars (1. Sensation – 2. Respiration – 3. Timing – 4. Hitting Point) for the Smrikva Bowl 2010 players, families and coaches was held in Smrikve on 28th and 29th of June 2010. The Class was run by Luca Appino and assisted by Mimi, Miro Hrvatin, Ariana Rabac.

The first Tennis Talents in Smrikve Alumni are: 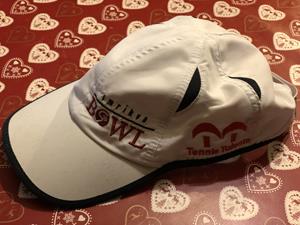 1st Smrikva Bowl Tennis Talents Family Week 2015 program with focus on the Tennis Talents Pillars (1. Sensation – 2. Respiration and Muscle Release… Rhythm – 3. Timing and Acceleration – 4. Ideal Point of Contact) and Momentum for the Smrikva Bowl players, families and coaches was held in Smrikve from 18th and 25th of April 2015. The Class was run by Luca and Mio… assisted by Tomo, Ivan and Matej.

2nd Smrikva Bowl Tennis Talents Family Week 2016 run by Luca and Mio… and assisted by Tomo and Max was held from 16th and 23rd of April 2016. The program had focus on the Tennis Talents Method (1. 5 Senses, 2. Muscular release and acceleration, 3. Ideal impact zone, 4. Timing, rhythm and footwork, 5. Tactics: 5 options) and Momentum (the invisible force in tennis) for the Smrikva Bowl players and families was held from 22nd and 29th of April 2017 The program had focus on the Tennis Talents Method (1. 5 Senses, 2. Muscular release and acceleration, 3. Ideal impact zone, 4. Timing, rhythm and footwork, 5. Tactics: 5 options) and Momentum (the invisible force in tennis) for the Smrikva Bowl players and families was run from 13th till 20th of April 2019 The program had focus on the Tennis Talents Method (1. 5 Senses, 2. Muscular release and acceleration, 3. Ideal impact zone, 4. Timing, rhythm and footwork, 5. Tactics: 5 options) and Momentum (the invisible force in tennis) for the Smrikva Bowl players and families was run from 21st till 28th of April 2019

Professional Tennis Registry – PTR is the largest global organization of tennis teachers and coaches. One of PTR’s key objectives can be summarized in: Setting the Standard for Tennis Teaching Excellence. Professional Tennis Registry provides quality education, global certification, and unsurpassed service to tennis teaching professionals and coaches. With more than 16,400 members in 125 countries, PTR is an inclusive and diverse organization whose members strive to Make a World of Difference in growing the sport of tennis. Miodrag Bozovic and Tomislav Bozovic are both PTR members.

Wilson is #1 tennis racquets and accessories company in the World. Players such as Roger Federer, Juan Martin del Potro, Serena and Venus Williams are some of the famous tennis players currently using Wilson racquets and Wilson is one of the Smrikva Bowl sponsors.

Smrikva Bowl winners are honoured with Wilson International Contracts that are usually given to the most talented players of 14 years of age and older.

• LEVERAGE THE SMRIKVA BOWL PLAYERS NETWORK… many players decide to come to Smrikve before or after their Smrikva Bowl… and the following are some of those who visited Smrikve not only for the Smrikva Bowl… :) In 2009 we started the building of the Smrikva Bowl Library. Since then each Smrikva Bowl player is requested to bring with him a cultural book that will remember his stay in Smrikve and will represent his culture of origin that guests of Smrikve will be able to consult, enjoy and discover. SMALL ERIC, M.D., Kids & Sports, Everything You and Your Child Need to Know About Sport, Physical Activity, Nutrition, and Good Health, – A Doctor’s Guide for Parents and Coaches, Newmarket Press, New York , 2002. (donated by Tara Kurepa in 2017)

GRANT ADAM, Give and Take, Why helping others drives our success, Weidenfeld & Nicolson, London, 2013.

MANSON MARK, The subtle art of not giving a f.ck, a counterintuitive approach to living a good life, Harper Collins Publishers, Croydon, 2016.

QUINN ANN, How to be an extraordinary athlete, the secrets to sporting success, Quintessential, Melbourne, 2012. (donated by Mia Princip in 2019)

SEPPALA EMMA, The happiness track, how to apply the science of happiness to accelerate your success, Harper One, New York, 2016.

SYED MATTHEW, You are awesome, Find your confidence and dare to be brilliant at (almost) anything. Wren and Rook, 2018. (donated by Rose Clifton in 2019)

ŠARIĆ IGOR, Anything is possible, use your potential, Igor Šarić, Zagreb, 2016. (donated by Dora Mišković in 2017) APPINO LUCA (in collaboration with NADAL TONI), The World of Rafael Nadal, secrets of his success, 30 ways to improve your game www.rafabook.com 2009.

HARMAN NEIL, Court confidential, inside the world of tennis, The Robson Press, London, 2013. (donated by Trian Lakha in 2018)

TIDEY WILL, life with Sir Alex, A Fan’s Story of Ferguson’s 25 Years at Manchester United, Bloomsbury, London, 2011. (donated by Benjamin Gusic – Wan in 2017) • Munchkin Tennis, teaching tennis to kids from 4 to 10 years of age, run by Luigi Bertino in Marlengo (Italy), July 2010.

List of 140+ SPEAKERS followed on Symposiums, Conferences and Classes: BOLLETTIERI NICK, Nick’s practice with a purpose – The Backboard, 2003.

and some were good competitors at Croatian National Level…