WE WALK ALONE BUT I KNOW WE ARE NOT ALONE...

For over 25 years my family and friends are donating over 6000 working hours every year to make Smrikva Bowl happen with aim to inspire children to continue to pursue their dreams.

I am estimating at the moment when I drafted this words, back in 2021, that for the 35th Smrikva Bowl anniversary the past successful Smrikva Bowl players within TOP 100 ATP/WTA ranking will total together over 1 billion USD in prize money... 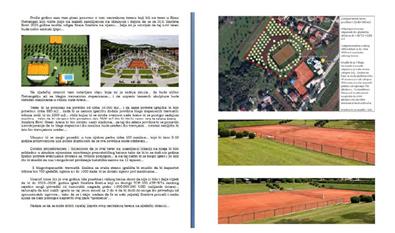 I have a dream to make real one day a central court surrounded by olive trees garden which will have the capacity to host around 250 families during the Smrikva Bowl finals... I have a dream that nearby that green tennis theater there will by a round classic monument to honor donations made by Smrikva Bowl seeds to make this dream real...

I have a dream to maintain the beauty of Smrikve gardens for centuries...

I have a dream to continue to inspire new generations for decades to come... and I know I can not do it alone... I know that I will need your support and help...

Ronzio Oleodinamica is a hydraulic manufacturer company based in Milan in Italy. Ronzio family have supported Smrikva Bowl since its foundation.

One of the first gifts that they brought from Milan was a special ice cream made by Zela and only local people from Boffalora may understand what Zela means. This was the spirit behind the foundation of the tournament since the beginning. Allow the kids to try the top ice cream, allow the kids to create nice memories. The ice cream was brought with a lot of ice in the bag to conserve it during the car trip from Milan to Pula :).

Many people take vacations to be part of the Smrikva Bowl Staff and a special thanks is due to each of them.

Istria from Smrikve is an e-book about Istrian culture that aims to provide the reader with some useful information about the places that should be visited in the Istria region and is also a dream that one day Istria will become one of the nicest places for living in the World.

In Istria from Smrikve you will, among other, find information about the Istrian architecture, history, people, music, cuisine, olive oil, wine and major cultural events.

Luca Appino is a long term Smrikva Bowl friend and Golden Honorary Member since this title was established. In 2009 Luca decided to start, in collaboration with Toni Nadal, to share his experience through TENNIS TALENTS. The main focus of his idea is to help talented players and their families in understanding the requirements to reach the talent development potential.

Smrikva Bowl friend Luca Appino introduced Smrikva story to Patrick Mouratoglou and since 2008 thanks to their friendship Smrikva Bowl winners are living at his Academy a wonderful tennis week every year.

Wilson could be defined as #1 tennis racquets and accessories company in the World. Legendary players such as Roger Federer, Serena Williams are only some of the famous tennis players currently using Wilson racquets.

Since 2008 Wilson is the Smrikva Bowl friend and I am pleased to say again thanks to Luca Appino who introduced Smrikva Bowl to Wilson.

Duravit is a company based in Pula that operates in a food business and salami and cheese and water to make children's 8 days stay in Smrikve feel like a birthday party moment we buy from Duravit.

Izo "iz Balici" is a company that operates mainly in the food business. They produce bread, biscuits, pastry, cakes and machines for food industry.

Balici is the village located nearby the village where my grandfather Mate (Matteo) was born and Roce family friendship started with my grandparents.

During the tournament we traditionally offer sandwiches and drinks to the players and family Roce help us to make Smrikva Bowl like a big eight days birthday party. Every sandwich we give to the kids is made of Balici bread and the cake for the finals is made for years in Balici.

Ledo is a Croatian ice cream brand and is the regional leader in the production and distribution of ice cream and frozen foods.

Since than Ledo continue to donate an ice cream to every Smrikva Bowl player.

Babic family are the founders of Komot company, one of the leading operators in Croatia dedicating among others to the production of tennis blende.

Vlado Babic is also the person that suggested the idea to plant an olive tree during the tournament. He enjoyed Smrikva Bowl and said that olive tree would be a nice idea and the year after we started to plant centuries old Olive Trees. It was decided to plant an old olive tree to add to the traditional message of the olive tree the message of intergenerational responsibility that is an important message for the kids of today.

Please visit www.smrikve.com to learn more about Smrikve, Istria from Smrikve, Smrikva Bowl, one of the most important under 10 tennis tournaments in the World, and Villa Smrikve, for your accommodation with swimming pool in Stinjan (Pula - Pola) if you decide to spent your holiday in Istria, Croatia.