In 1953, she was the first woman to win the Grand Slam winning all four major tournaments (Wimbledon, US Open, French Open and Australian Open) in the same year. The foundation has promoted junior tennis development for over thirty five years and continues to benefit countless numbers of boys and girls through the United States. 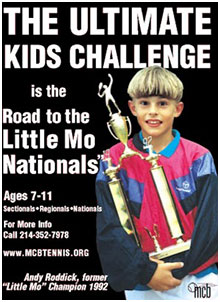 In 1992, Andy Roddick won the “Little Mo” title at 10 yeas of age. Today, he is one of the top players in the world. Andy was living in Austin, Texas when he won the title and the “Little Mo” was for Texas players only. The “Little Mo” circuit is now on a national level where over 1,700 players participate annually.

From 2002 till 2010… nine very special editions of the top Little Mo and top Smrikva Bowl players have been organized… for the first two years in Texas and the following seven years in Istria… after 9 years… since 2011 the selected top Little Mo Nationals players are invited to play in the Smrikva Bowl Main Draw.