During the ceremony, every Ambassador put a tiny piece of land close to the root of the Olive tree and say his or her name. This way the tree gets the names and a piece of soul of each Ambassador. In 2005 the tree got 100 names coming from over 20 countries and from 3 continents. Every year a new old Olive tree receive the Ambassadors’ names from many countries and continents. 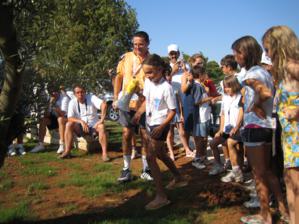 The Olive tree is a symbol of peace. The age of the tree is a symbol of intergenerational responsibility. Every person is born without knowing anything about life on this earth and it is the responsibility of every generation to understand and to learn to preserve all that each of us is born with, so as to possibly improve upon it prior to departing.

The people that planted this Olive tree for the first time are no longer among us and the message this Olive tree transmits to the Ambassadors is that intergenerational responsibility alone will allow future generations to enjoy the beauty of life, the sunsets and the seasons of the earth.

AMBASSADORS’ OLD OLIVE TREE AND THE CIRCLE OF LIFE…

The relationship between Mufasa, Sarabi and Simba reminds me of both: parents and family love, but also about the intergenerational responsability.

Timon, Pumbaa and Simba relationship reminds me about love between friends. Pumbaa also make me think abuout empathy, intuition and loyalty. The relationship between Simba and Nola reminds me again about the importance of love. Rafiki, the wise old baboo, with his many centuries old tree reminds me about the importance of knowledge and experience of the older. There are many other particular moments that every person on its own, based on his or her own life experience, discover by watching these artworks.

You might be interested to know that most of the characters’s names in this cartoon have a particular meaning in Swahili language: Simba means “lion”; Nala means “gift”, and love is for me one of the greatest gifts that people can receive and give during their life; Sarabi means “mirage”; Pumbaa means “dull-witted” or “stunned”; and Rafiki means “friend” :). These names with their meanings make me think of the American Indians and the way they used to give the names to their people.

Every person is born without knowing anything about life on this earth and it is the responsibility of every generation to understand and to learn, to preserve all that each of us is born with. When Mufasa was explaining to Simba that is not easy to be the King… a good King should know that everything around us lives in a delicated equilibrium and with intelligence we should try to understand it and respect it. The intergenerational responsibility alone will allow future generations to enjoy the beauty of life, the sunsets and the seasons of the earth. Enjoy the circle of life.

I am pleased to repeat words of a Nobal Prize for Peace who was guest speaker to one of Ambrosetti’s Young Leader Group meetings. It is a tradition that every guest dedicate few words to the Group and he wrote down the following

Everything around us lives in a delicated equilibrium and with intelligence we should try to understand it and respect it. It is true that every generation face new challanges but there are many examples in the past how the old generations managed and solved particular problems and this is way knowledge, human curiosity and will to learn are important.

IN MEMORY OF AN OLD FRIEND – COMMON SENSE…

I received an e-mail with a text that was published in the London Times several years ago. In short it describes realistically current Global economic and moral (social) difficulties and probably it also indicates what should be done to solve them.

I decided to publish it in this section because Smrikva Bowl Ambassadors need to rely on their parents, grandparents, coaches, teachers, etc. Kids will listen but the parents are in charge, as the old Common Sense teach us.

I would like to think about this article and difficulties as any other mistake people do, and in the text below it is also a matter of intergenerational responsability as you may note.

If parents, teachers, coaches and the older generations try to recall Common Sense the path towards recovery will be laid down. Following the cyrcle of life there is always a chance for Common Sense to come back.

In tennis only doing mistakes kids and also older players learn how to hit properly the ball and from mistakes we learn.

Enclosed is the text published on London Times several years ago.

London Times Obituary – Common Sense – (Words we should all think about….)

“Today we mourn the passing of a beloved old friend, Common Sense, who has been with us for many years. No one knows for sure how old he was, since his birth records were long ago lost in bureaucratic red tape. He will be remembered as having cultivated such valuable lessons as:

Knowing when to come in out of the rain; why the early bird gets the worm; Life isn’t always fair; and maybe it was my fault.

Common Sense lived by simple, sound financial policies (don’t spend more than you can earn) and reliable strategies (adults, not children, are in charge).

His health began to deteriorate rapidly when well-intentioned but overbearing regulations were set in place. Reports of a 6-year-old boy charged with sexual harassment for kissing a classmate; teens suspended from school for using mouthwash after lunch; and a teacher fired for reprimanding an unruly student, only worsened his condition.

Common Sense lost ground when parents attacked teachers for doing the job that they themselves had failed to do in disciplining their unruly children.

Common Sense declined even further when schools were required to get parental consent to administer sun lotion or an Aspirin to a student; but could not inform parents when a student became pregnant and wanted to have an abortion.

Common Sense lost the will to live as the churches became businesses; and criminals received better treatment than their victims. Common Sense took a beating when you couldn’t defend yourself from a burglar in your own home and the burglar could sue you for assault.

Common Sense finally gave up the will to live, after a woman failed to realize that a steaming cup of coffee was hot. She spilled a little in her lap, and was promptly awarded a huge settlement.

Common Sense was preceded in death by his parents Truth and Trust, his wife Discretion, his daughter Responsibility and his son, Reason.

He is survived by his 4 stepbrothers;
• I Know My Rights
• I Want It Now
• Someone Else Is To Blame
• I’m A Victim

The following song is named “Hodaj” that in English means “Continue to walk”. The song is written and performed in Pula’s Arena by one of the most talented current Croatian song writers and musicians: Zlatan Stpisic Gibonni. Gibonni is UNICEF Ambassador of Good Will and I wanted to end this article on Common Sense with Gibonni’s song that contains the “never give up” message… and in addition to that he might have been inspired by Lao Tzu saying “Heaven arms with love those it would not see destroyed.”… ;)

In the circle of life the Common Sense can always return and is a matter of choices that we do day by day.

As I already wrote above, Rafiki, the wise old baboo, with his many centuries old tree remineds me about the importance of the knowledge and experience of the older. In Swahili language Rafiki means “friend” and this reminds me about the way how American Indians or Native Americans used to give the names to their people. Sharing the knowledge many people consider of being friend.

In the following video Rafiki share part of his knowledge with Simba in order to help him. The lesson ends with an advise: You can run from the past or learn from it… also in tennis, as I already wrote, only doing mistakes kids and older players learn how to hit properly the ball and from the mistakes we learn…

At the beginning of “The Art of Loving” written by Eric Fromm, Paracelsus was quoted. In that quotation is said:” The more knowledge is inherent in a thing, the greater the love… Anyone who imagines that all fruits ripen at the same time as the strawberries knows nothing about grapes.”

The old baboo Rafiki could remind the wise and old American Indians that can be seen in Western films taking decision around the fire. Usually they try to advise younger people to be wise while taking decisions.

There is a legend that their decisions were taken by taking into consideration the impact of the taken decision on the seven future generations. This might not be true but it is nice to think about it.

My experience tells me that every person is born without knowing anything about life on this earth and it is the responsibility of every generation to understand and to learn, to preserve all that each of us is born with.

Many years ago I bought in Barcelona a poster with an old American Indian named Chief White Cloud. On the poster were printed few considerations that are atributed to him.

In his words he tried to explain why different cultures of the Native Americans and new imigrants did not understand each other at the time. I am not sure if these were for sure his words but they appear wise to me.

Today the USA looks different from what Chief White Cloud would have imagined at the time and is the country that try to understand new imigrants better than any other country.

Your religious calling was written on plates of stone by the flaming finger of an angry God.

Our religion was established by the traditions of our ancestors, the dreams of our elders that are given to them in the silent hours of night by the Great Spirit, and the premonitions of the learned beings.

It is written in the hearts of our people, thus we do not require churches – which would only lead us to argue about God. We do not wish this.

Earthly things may be argued about with men, but we never argue over God.

And the thought that white men should rule over nature and change its ways following his linking was never understood by the red men.

Our belief is that the Great Spirit has created all things. Not just menkind, but all animals, all plants, all rocks… All on earth and amongst the stars, with true soul. For us all, life is holy.

But, you do not understand our prayers when we adress the sun, moon and winds.

You have judged us without understanding. Only because our prayers are different. But we are able to live in harmony with all of nature. All of nature is within us and we are part of all nature.