There are two books written and dedicated to Smrikve by the Smrikva Bowl founder:
1. Unione Europea e Democrazia Cosmopolita (2005) – the book with focus on the importance of the civilization and civil society.

2. Istria from Smrikve (2009) – the cultural travel guide about Istria Region.

Both books are also gifts to the Smrikva Bowl players, their families and coaches, Smrikve friends, and people who enjoy discovering different cultures. 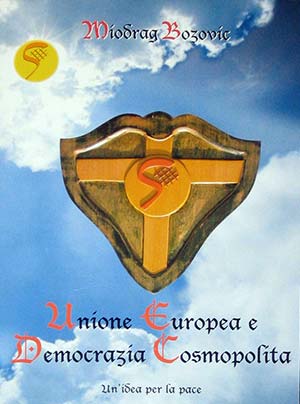 I am pleased to let you know that the book I completed in 2005, on the importance of civilisation and the civili society, was translated from Italian in English and published on our website to be shared with Smrikve friends.

The book was completed several years ago but the thoughts I express in it have not significantly changed since then.

Parts of the book were written thinking on Smrikva Bowl kids and this is a small gift to them, to Smrikve friends, and to all the people that appreciate the civil society.

FEW WORDS ABOUT THE BOOK…

In 2005, 10 years after the Smrikva Bowl foundation, Smrikva Bowl was already a Global under 10 tennis tournament and during that year I completed the book: “European Union and Cosmopolitan Democracy, an idea for peace”.

This book is a product of almost 15 years of studies and analysis. It contains my personal experience, economic studies, political science studies, European Union’s integration studies, Ambrosetti’s experience and other cultural studies.

In the book I describe how the respect of some basic rules could contribute to avoid wars in the future. I decided to put the book on-line to make it available to all the people that are interested in the subject and is a special gift to the Smrikva Bowl players. The book is in line with the Smrikva Bowl idea of sharing cosmopolitan values and is dedicated to Smrikve, the place where Smrikva Bowl is held.

I use to say that culture, children, sports and music are already part of the Cosmopolitan World. I also tried to write the book to be comprehensive to the people that have not completed higher education.

The book is not written for the children but children many times understand much better than the older the Cosmopolitan World. When they become older they will understand the book and I hope they will continue to be Smrikva Bowl Ambassadors.

DESCRIPTION OF THE COVER…

The cover of the book is the picture that you can see above and was intentionally the same as the 10th Smrikva Bowl 2005 brochure. The description of the cover in the book is as follows:

“The Smrikve coat of arms is highlighted on a background of sky and clouds, illuminated by the sun, itself represented by the symbol of the Smrikva Bowl.

Smrikve is the place where Mate and Milka Bencic (Matteo and Emilia Benci) settled down with their family. It is located near the city of Pula. Smrikva is a Mediterranean plant, which in English is called juniper.

Founded in 1996, the Smrikva Bowl is an annual international children’s tennis tournament taking place in Smrikve. This tournament was born with the vision of promoting values which reach beyond all frontiers, towards cosmopolitan values. Children, sports and music are part of the Cosmopolitan World.

The symbol of the Smrikva Bowl was designed in 1996. It represents a tennis ball and a stylised tennis racket. In it some may see the letter “S”, for Smrikva, while others can make out the line we see when we rotate a tennis ball. The birth of this symbol is inspired by modern Spanish art and the city of Barcelona.

Carved in wood in 1999, the Smrikve coat of arms is a mosaic of symbols.

The green shield with a yellow cross is the city of Pula coat of arms. Pula is found in Istria, in Croatia. In its buildings and foundations we can still see the many civilisations that have lived there, during its over three thousand year history.

The second symbol we come across is the symbol of the Smrikva Bowl, already represented as the sun in the cover. The tennis ball in the coat of arms once again becomes the sun, which is the fountain of life. Above the sun we can see the wings of a seagull, which symbolically represent freedom. Looking closely at the coat of arms we can see these wings traced by a golden line above the sun.

The shape of the coat of arms has two meanings. The first is linked to the shape of Istria, at the tip of which is found the city of Pula and Smrikve. The second meaning is in the form of the heart. Love is the cosmopolitan value per excellence, as far as people and humanity are concerned. Various forces have driven human energy over time: ideology, religion, hate, but the purest has always been love.

An additional message is worth noting. The shadow in the coat of arms is not a realistic reflection, given the position of sun. On the contrary this shadow represents the passage of time; like the time dimension we find in a Picasso painting. The meaning of time in the cover also connotes the meaning of intergenerational responsibility. Every person is born without knowing anything about life on this earth and it is the responsibility of every generation to understand and to learn to preserve all that each of us is born with, so as to possibly improve upon it prior to departing.

Intergenerational responsibility alone will allow future generations to enjoy the beauty of life, the sunsets and the seasons of the earth.

The image of the clouds and the sky is born from a desire to illustrate the sky of Pula, which especially in spring and summer fills up with puffy clouds. The sky turns into a blue meadow full of lots of white sheep. The clouds also represent thoughts and emotions which come and go and which should not bind people, but should be left to flow as life flows. These clouds also remind me of the stories my father once told, of the great fun he had flying his airplane just above the clouds. From a plane the earth seems so small, as do so many human problems.”

GOLDEN WINGS AND THE SEAGULL IN THE SMRIKVE COAT OF ARMS…

I do like and really enjoy watching seagulls that very often fly above my home and the golden wings in the Smrikve coat of arms make me think of Giuseppe Verdi’s opera Nabucco and the chorus:”Va’, pensiero, sull’ali dorate…”...”Fly, thoughts, on wings of gold…”.

Recently, Leo Pavela, a journalist from Rijeka, with the help of two friends: Sasa Valencic and Vesna Valencic, arranged and translated into English Zdenko Runjić’s song “Galeb i ja” – “My Seagull”. Historical singer of this song is one of the most important Croatian singers: Oliver Dragojević, but Leo Pavela decided to sing on his own this song and Medvid from Pula helped him to create this Video. Most of the images are taken from the air above Istria.

Leo Pavela’s idea is to candidate this song as the hymn of intercultural dialog between the people in Europe. The meaning of the words of this song are extraordinary in Croatian and it was a hardwork to translate it in English. Walt Disney is among the most successful translator of its cartoons’ songs into various languages and probably the voice of an important English singer would add beauty to this work.

ISTRIA from SMRIKVE is a gift to all Smrikva Bowl players that travel over the Earth to play Smrikva Bowl. The book aims to further promote Smrikva Bowl and present Istria as cultural destination. It is also a gift to all the people who enjoy learning about different cultures.

Presentation letter sent at the end of March 2009 via e-mail to many Smrikva Bowl Ambassadors and Friends spread on all the continents follows:

I completed recently a virtual book about Istria and its culture that aims to promote future ATRIVM SMRIKVE HOTEL (SMRIKVE LOUNGE), to further promote Smrikva Bowl (considered one of the most important under 10 tennis tournaments in the World) and present Istria as cultural tourism destination.

www.smrikve.com/istria/ is the link that I am pleased to invite you to visit.

If you like Istria from Smrikve I would be also pleased if you forward this link to your friends that may be interested to visit Istria and thus help to spread the word about Istria as cultural destination.

The book aims to provide the reader with useful information about the places that should be visited. You will find information about: Istrian architecture, history, music, cuisine, olive oil and wine. Over 90 places are described in it and almost 1800 pictures were made. The best traditional restaurants, olive oil and wine producers were gathered in a database that you can easily find in the book or using the toolbar, or the section of Istrian Cuisine.

If you decide to include Istria in your travel itinerary, I would be pleased to let you know that you can consider to be our guest in Smrikve. Smrikve is a privately owned estate and a tennis club (home to Smrikva Bowl), situated on the outskirts of the city of Pula, surrounded by olive groves and vineyards. Smrikve is located mere 5 minutes from the beach, 10 minutes from Pula’s Roman Arena, about 15 minutes from Pula’s International Airport and only few kilometres from the famous Brioni islands.

At Smrikve you can play tennis, taste our own made olive oil and wine, enjoy the farm animals, take pleasure in the surrounding nature and the nearby sea or have lovely discussions by the fireplace. Villa Smrikve can currently accommodate few families. However, upcoming ATRIVM SMRIKVE HOTEL (SMRIKVE LOUNGE) will provide more accommodation.

Events and people that shaped European history have had much influence in Istria as well. Istria’s size could be compared to Rome, London and Paris. However, instead of driving through the crowded streets of Rome, Paris or London you will be driving through the beautiful Istrian nature while enjoying the same European cultural heritage.

About 200,000 inhabitants, beautiful Mediterranean nature, lovely hilltops covered with woods, crystal blue sea, excellent food, olive oil that is considered among the best in the World, outstanding wine, many nice towns and villages that are well worth a visit – most of which are inhabited for over 3000 years. This is in very few words ISTRIA.

Istrian region was the most prominent during the Roman Empire period, the Early Byzantine Empire, the Venice Republic, the Austro-Hungarian Empire, and during Yugoslavia, when the Brioni islands were the stage of Tito’s Non Aligned policy during the Cold War.

Today, Istria is often compared to Tuscany for its beauty, culture and the tradition of producing olive oil and wine. If you visit Istria you will realise that Istria is simply Istria. Throughout the year, and especially in the summer, there are various cultural events held every day in almost every Istrian town. Every day you can find something that could be of interest to you and in just few hours you can be on St. Mark’s square in Venice.

I hope you will enjoy Istria From Smrikve and forward the link of the book to your friends thus help Istria to become one day a recognized cultural destination. Thanks in advance for each e-mail :). 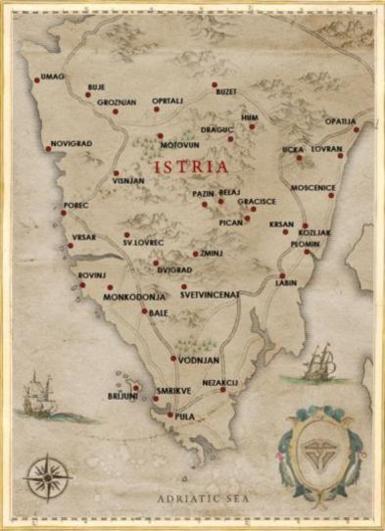