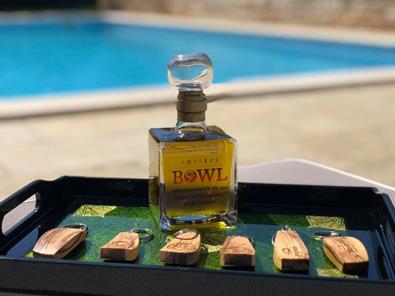 In 2005, for the 10th Smrikva Bowl anniversary, we started a tradition of planting an Olive tree during our Smrikva Bowl Ambassador’s nomination ceremony.

The Olive tree selected are traditionally older then our players. The age of the tree is a symbol of intergenerational responsibility. Every person is born without knowing anything about life on this earth and it is the responsibility of every generation to understand and to learn to preserve all that each of us is born with.

In March 2019 we bottled for the first time a special collection.

At the time 14 generations (over 1440 players) had their olive trees when the story of limited collections started. The children who planted our olives makes the collection bottles so special.

As of March 2019, over 1930 players from 87 countries and 6 continents participated and on the first 14 collection bottles representing 14 generations was written the following:

Smrikva Bowl was founded in 1996 and over 1930 players from 87 countries and 6 continents participated so far. In 2005 Smrikva Bowl players started to plant olive trees. 14 generations (over 1440 players) have their olive tree in Smrikve.

Collection bottles are tracked and the 1st limited edition is spread as follows:

Thank you for supporting our dream.

As of April 2021, over 2220 players from 98 countries and 6 continents are part of the Smrikva Bowl family and on the 17 collection bottles representing 17 generations will be described in the following…

In case you would like to be listed for one of the 17th collection bottles 2022 Limited edition please feel free to let us know.

The new collection bottles is expected to have inscribed at least the following:

Over 2220 families have been touched directly by Smrikva Bowl experience since its foundation back in 1996.

Many famous tennis players left footprints on Smrikve tennis courts and we are proud to present the names of the players who reached TOP 100 ATP/WTA during their career so far… and those who among their titles holds Grand Slam titles.

SB players are spread today in 98 countries and six continents.