Racice is a small village of about twenty inhabitants that hosts an Istrian Palace. It is the Walderstein family palace and I choose to include this village in Istria from Smrikve for this building. The village is located in the area between Draguc and Buzet and hopefully one day it will return to its original beauty.

Once you arrive to Racice village you can park the car nearby the Church of Our Lady, built in 1750, at the entrance of the village. From there you can walk till the end of the road that ends up with the above mentioned palace.

You will pass near the Parish Church of the Holy Trinity, with an inscription that remind that was restructured in 1700 by Giovanni Francesco Bolderstein, and after a hundred meters you will be in front of the Walderstein palace. 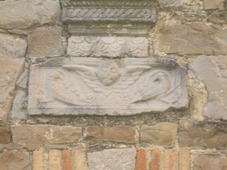 Leaving the village, on your left side, there is a cemetery with the Church of St. Stephan from 1580. In front of the church there is a tomb of the last Count of Racice, Pietro Walderstein. The most common surnames of the village were Walderstein and Bolderstein that probably have the same origin.

In Racice’s photo gallery you will find some pictures of the Walderstein Palace.

Racice was probably a prehistoric settlement and also a Roman settlement but its current outlook probably developed in the recent history in the 12th and the 13th century.

It was a part of the territory of the Aquileia Patriarchs and later on was part of Pazin‘s County.

The first written notice of Racice dates back into 1312 when Count Enrico II of Gorizia gave Rachiz to his daughter Alaubeta or Alzubeta. It is not cleared the succession of further rulers and how Mainardo of Rasch became owner of Racice in 1341.

It is known that Alaubeta married and became part of Pramperch family that owned Racice until 1464.

In 1464 Acazio Pramperch died without successors. He was married with Dorotea Krottendorfer of Pazin and in 1467 Giorgio Krottendorfer became the new ruler of Racice.

In 1494 his successor was Giorgio Walderstein and Emperor of Austria confirmed the rights over Racice to Walderstein family. Giorgio was the brother of Baldassare Walderstein who ruled over Paz.

At that time Racice was located in the part of Istria that was  under Austrian domination.