Roc is another old Istrian town that has preserved parts of its old architecture and urban structure. It is located on a small hilltop in the northern part of Istria, 8 kilometres from Buzet. For those who like the sound of the accordion the traditional meeting "Zarmoniku v Rocu" on the second Sunday in May should not be missed. 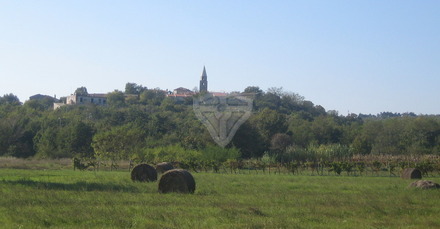 Roc is placed on a 334 meters hilltop above sea level and the most beautiful view of the town you’ve got is by driving towards it from the Lupoglav direction.

Roc is a famous Istrian cultural centre. Since the 13th century it was the centre of the Glagolitic literature, typography and printing activity.

Every year at the beginning of June, in memory of the Glagolitic tradition, a course called “The Small Glagolitic Academy” for the Croatian elementary school pupils is held in Roc. The most famous Glagolitic writers from Roc were: Jurij Zakan, Simun Greblo and Ivan Bencic. 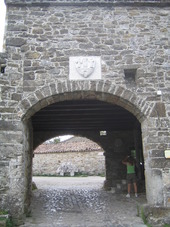 Roc is also famous for the “International Festival of Diatonic Accordion Players”. This kind of diatonic accordion is popularly called in Istria “triestinka”. Triestinka means the accordion from the Italian city of Trieste.

“Z armoniku v Rocu” is the name of the unique, traditional festival held every year on the second Sunday of May .

You can park the car by the big town gates and start the visit from there. There were several town gates in the town and only two of them are still well preserved.

The big town gates were also the main gates and above the gates you can see a coat of arms with an inscription of the year 1064. 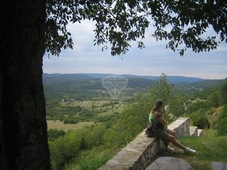 1064 is the year when Roc is mentioned for the first time in the written documents. Whint the town gates there is a Roman lapidarium and situated above them is gallery  Ronz. Rus and Ronz were the names of Roc in the 11th and 12th century.

What distinguishes Roc from other similar Istrian towns is that the streets are wider and there are several large squares.