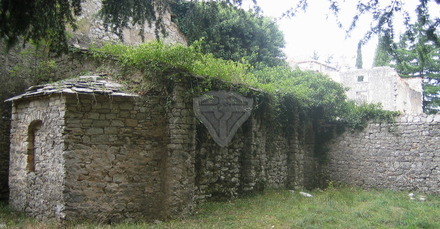 It is likely that this monastery was founded around 1002 by St. Romualdo and was named later on San Michele di Leme. St. Romualdo built a monastery on a place where some Benedictine Monks already erected a small church in the mid of the 6th century.

This small church can be seen nearby the attached bigger church and it testify that a base existed when Romoualdo set up the Monastery.

It is also likely that the original church was destroyed during the Slav Avars inroads and later on rebuilt in the 9th century.

St. Romualdo was born in Ravenna in 956. He belonged to a Noble family Onesti that had a Noble title of Dukes. It is known that he founded the Camaldolite Benedict Order and is assumed that he founded in Istria this Monastery and the Monastery of Santa Petronilla near Dvigrad.

The story that we know today about St. Romualdo is that probably after the foundation of this two monasteries he lived for a couple of years a hermit life in the Cavity of St. Romualdo in the Lim Bay.

In 1041, the abbot Giovanni completed the bigger Church of St. Michele. In front of the two churches there are the ruins of the big building, known as castle, that was probably built several centuries later.

Near to this big building there was a portico of the abbey from the 13th century that was placed in the middle of the castle and the abbey that was completed in 1040.

The castle is in ruins and the portico and the abbey are completely destroyed. Only the two churches still have the roof and significant investments would be needed to restructure the whole Monastery.

Since the Monastery started to function Porec’s Bishops requested the payment of feudal rights over the property. The Monks were reluctant to pay and after a mediation of the Aquileia Patriarchs the Monks agreed for a limited annual payment in nature to the Bishops.

The Monastery of St. Petronilla was probably more important than this one because in 1266 the abbot Matteo sold a part of the properties in Klostar to the abbot from Sv. Petar u Sumi.

In 1300 the Monastery was abandoned and Porec’s Bishop Bonifacio decided to sell it in 1305 to the Templar Knights. In 1314 it has been returned to the Camaldolite Order.