Boljun is an old fortified Istrian hilltop town located in the north eastern part of Istria below the Ucka mountain. You can reach it by the road arriving from Cerovlje trough Paz, or by the road from Krsan. It is located on 254 meters high hilltop and since Roman times its position was strategic. It was strategic also in wars between Venice and Austria. 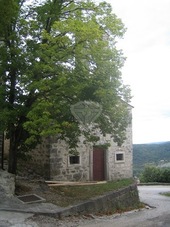 Arriving form the road that pass trough Paz you will note this fortified village on the hilltop in the middle of the Boljun’s field. On the road towards the old town you will pass nearby the small Church of St. Vito and after few hundred meters you will be in front of the old big gates.

You can park your car near the big gates. Nothing has left, a part the name, of this old town gates but on your right side you will see a very old small church. This is the Church of St. Cosmo and Damian dating back into 12th century.

It is known that the church was expanded between 1698-1705, while today would need major restructuring. 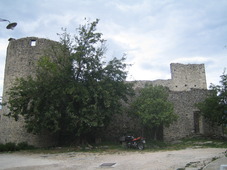 In the small square in front of the Church, nearby the centre of the square, there is a Roman stone pillar dating back into the 1st century.

If you take the street on the right side that goes towards the top of the hill you will arrive in the another square in front of the old Boljun’s castle from the 11th century. 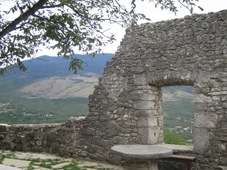 The walls of the castle are not preserved in every place so you have beautiful views from the court-yard towards Ucka mountain and Boljun’s field.