Medulin – Medolino:”Is the village where Crispo, son of Constantine the Great, was executed” 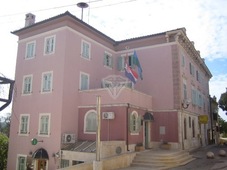 Few streets below the Parish Church, towards the sea, there is a small square with a big Municipal palace and an interesting small Church of Our Lady of Health from the 15th century.

During the summer Medulin has a wide tourist offer on Kasteja peninsula, and nearby the coastline. In the old town almost every house hosts a restaurant.

Medulin is another Istrian prehistoric settlement. As I wrote above during the Roman period several villas rusticae were built in the area of Medulin. There are several historiographer that assume that Medulin could have been disappeared Histri town Mutila.

Mutila, Faveria and Nesactium were all destroyed by Romans in the 2nd century B.C.. Tito Livio wrote about “Mutila oppidum” and according to the assumptions this settlement could have been developed in the place of the current Church of St. Agnes.

The Roman name of Medulin was probably Metilinum or Metellinum. During the Middle Ages was named Mutilianum. Medulin was also an important Roman harbour, named Portus Flanaticus, linked with Pula’s harbour.

In the area of Medulin there have been found the rests of several important Roman villas. There is also a legend that the big villa located on peninsula Vizula belonged to the Emperor Constantine il Grande that ruled over the Empire in the first half of the 4th century.

According to this legend the villa was used for a certain period of time as prison for the Constantine’s son named Crispo.

Crispo was his son from the first marriage and was killed on Felong island in 326. According to some sources Crispo was probably not guilty for what he was accused. The beauty of this villa was comparable to the one found on Brioni islands in Verige Bay.

According to stone inscriptions and other historical findings it is likely that Medulin territory belonged to various Emperor’s families like: Octaviano Augustus, Flavii, Elii and also to the Constantino il Grande.

After the fall of the Roman Empire, Medulin followed the destiny of the other Istrian towns and villages and was part of the Goths Kingdom, later on part of the Byzantine Empire, and again after was part of the Frank dominions.

Some historiographers assume that in the 6th century Medulin passed to the Church of Ravenna and before 1211 they could have transferred it to the Bishops of Porec. Later on was the dominion of the Counts of Pula, Sergi or Castropola.

In the mid of the 12th century the Arab geographer Edrisi mentioned Medulin as Mudulinah. It is known that in 1150 Medulin was named Metilino, in 1197, Mutiliano and in 1243 Mitila.

The first document where Medulin decided to be protected by Venice was signed in 1149 and the second document was signed in 1303. When Castropola left Pula in 1331 also Medulin passed to the Venice Republic.