With this investments Opatija started to became an elite tourist settlement..

In 1889, Opatija became the official health resort of the Austro-Hungarian Monarchy and probably the famous Opatija’s park dates from that period. The fountain “Helios and Selenas” is located in the park near the church of St. Jacob and was built during that year by Hans Rathausky.

In that period Opatija became one of Europe’s most popular health resorts and  tourist destinations.

The list of famous guests who had their  vacation  in Opatija is very long and includes: Cechov, James Joyce, Lehar, Giacomo Puccini, Mahler, the Emperor Francis Joseph, the German and Swedish Royal couples, King George of Greece, the Duke and Duchess of Luxembourg, Prince Wilhelm of Hohenzollern, the Bulgarian Queen, and many other Grand Dukes, Princes and Archdukes, etc.

After the fall of the Austro Hungarian Monarchy Opatija was part of Italy between the two World Wars. After the Second World War became part of Yugoslavia (Croatia).

After the second World War Opatija became part of Yugoslavia (Croatia). There were three agreements between Yugoslavia and Italy which established that Istria would become a part of Yugoslavia: Paris Agreement of 1947, London Memorandum of 1954 and the Osimo Agreement reached in 1975. In the first decade after the Second World War many Istrians, especially those living in towns and villages that for centuries were part of the Venice Republic, decided to leave Istria.

In 1991 with the fall of Yugoslavia and the founding of the Republic of Croatia, the internal republic boundaries were recognised as the state boundaries and Opatija is today part of Croatia.

Today Opatija is a home of the University of Hotel Management and remains a very pretty town with beautiful Art Nouveau architecture and very nice gardens. 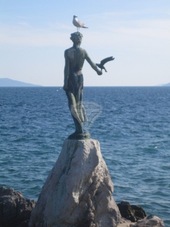 The recognizable tourist symbol of Opatija has became the sculpture named Woman With The Seagull. This sculpture was made by Zvonko Car in 1956.

The sculpture is located on the St. Mary’s promontory. On the same place in 1893 a sculpture dedicated to St. Mary was built in memory of the tragic death of Count Arthur Kesselstatt who lost his live during a sea storm.

In 1951 another strong storm destroyed the sculpture and in 1956 this new and elegant sculpture of the woman with the sea-gull was erected and become a new symbol of Opatija. 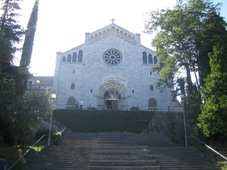 In Opatija’s photo gallery you will find pictures of the Evangelist Church, designed by the Austrian architect Carl Seidl and built mainly by Swedish-Norwegian King Oscar II and his wife Sophia. You will also see pictures of St. Jacob’s abbey and church the big Church of the Annunciation built in 1927.

This church was also designed by Carl Seidl. In end you will find various charming buildings dating back to the Austro-Hungarian period.