Groznjan – Grisignana: “In 1359, Pietro Dolfin, the Captain of Pasenatico, moved from Umag to Groznjan”

Some sources indicate that the antique name for the town was probably Graeciniana. It is likely that the name derives from the word Grisium that means rocky hill, Grisignana in latin. 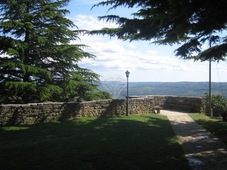 Like most of the Istrian towns, Groznjan was also a prehistoric hill fort settlement and it was a settlement in the Roman period. It is mentioned for the first time in 1102 when the Marquis of Istria, Ulrich II of Weimar, donated Groznjan to the Aquileia Patriarchs.

In 1238, Groznjan was under Kostel‘s administration. When Peter of Kostel died in 1338, Groznjan turned back to the Aquileia Patriarchs.

From 1353 until 1358 it was owned by Ulrich of Reifenberg. Groznjan was involved in several battles during that time.

In 1358, Venetians bought Groznjan for 4,000 ducats and from then onwards the Republic of Venice ruled over Groznjan until its fall.

During the Venice domination, Groznjan became the centre of its administration for the northern part of Venetian lands in Istria and it had that role for several decades. 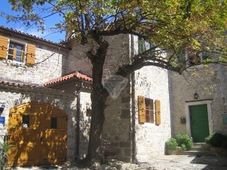 In 1359, Pietro Dolfin, the Captain of Pasenatico, moved from Umag to Groznjan. During this few decades Groznjan was the headquarters of the Venetian administration of Pasenatico until it was moved in 1394 to Raspor.

Groznjan was affected by the Venice wars with Austria at the beginning of the 17th century, and after the fall of Venice, Groznjan became part of the Austrian Empire that later on evolved into the Austro-Hungarian Monarchy. Groznan was also for a short period of time under the Napoleon’s administration.

After the dissolution of the Austro-Hungarian Monarchy Groznjan became part of Italy and after the Second World War part of Yugoslavia (Croatia).

In 1991 with the fall of Yugoslavia and the founding of the Republic of Croatia, the internal republic boundaries were recognised as the state boundaries and Groznjan is today part of Croatia. 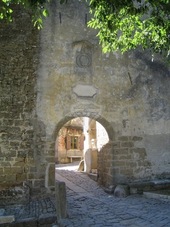 When you park the car, arriving from Buje, and start walking towards the old town you will first pass near the Venetian stone column above the part of the walls. In the past here were located the secondary town gates.

Groznjan was surrounded by the city walls, like many Istria medieval towns, and the walls you see today were renovated in the 14th century.