Almost every region described above was part of the Roman Empire and most of them were important agricultural regions at the time. If return to the Istrian kazun I have to observe that they are not spread all over Istria but only in parts that were cultivated during the Roman Empire period.

At the time the Istrian olive oil was considered the best in the whole Empire and there were several millions of olive trees in Istria.

It is clear that “Kazuni” were needed by the workers for various reasons during those times. Around Vodnjan, for example, there are over 2000 “Kazuni”. 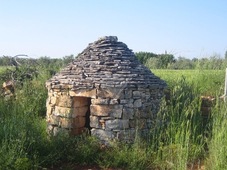 When I saw the drystone shelter in Provance that was so similar to the Istrian “kazun” I thought that the picture I was looking at was made in Istria.

I have several friends from Puglia and when they visited Istria and saw our “kazun” they told me that this contstructions are very similar to “trulli” they have.

This lead me to conclude for Istria that only the Romans were able to build such perfect structures in such a huge number.

They are so perfect that today, apart from Mr Branko Orbanic and few other people, almost nobody can’t build them close to their original beauty. In addition the cupola form of the roof was improved and developed by Romans.

“Kazun” is one of the symbols of Istria and it is likely that this prehistoric drystone techniques was enhanced in Istria by Romans. This is another piece of the Istrian cultural heritage that dates back into the old times.

If you come to Smrikve and you are interested to learn more about prehistoric period in Istria I will invite a friend of mine, Cici, to take a glass of wine with us. Cici is one of the greatest experts on that period in Istria. She made a lot of research and discoveries and she will be happy to share with us some of her findings. 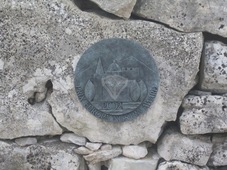 There are over 350 sites in the Croatian part of Istria that prove that Istria was densely inhabited during the Bronze and the Iron ages. Few hundred meters from Smrikve there were two prehistoric hill fort settlements: Kasteljir and Castion.

You should definitely visit Nesactium, the capital of the Histri tribe and Monkodonja, near Rovinj.

Monkodonja is the place where you can get the feeling of the architecture of a prehistoric hill fort settlement because on most other sites the current towns have developed.

The Histri tribe was destroyed in 177 BC by Romans. In that battle the Histri’s king Epulo stabbed himself to avoid being taken prisoner by the Romans.

After the battle the Romans started the rule over Istrian territory and they started to spread their culture. The Romans also started to develop urban centres along the coastline, connected by roads.