Istrian traditional music is based on untuned Istrian music scale. The singing of the songs are usually executed in pair in thirds and our most popular dance is balun. After the Smrikva Bowl finals as a gift for our guests we have the pleasure to enjoy Istrian folk dance group Balun from Vodnjan. 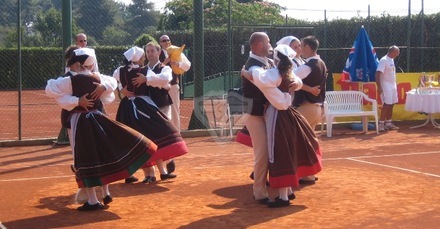 Istrian folk song is particular for the untuned Istrian music scale. This untuned music scale makes the Istrian songs very unique. The chants are in most cases performed by two singers, singing in thirds.

This way of singing is called “na tanko i na debelo” (thin and thick). Two-part singing and playing in the Istrian scale was inscribed in 2009 on the Representative List of the UNESCO's Intangible Cultural Heritage of Humanity. My grandfather and grandmother, Mate and Milka Bencic (Matteo and Emilia Benci), were very good Istrian folk singers. Over the years they recorded various songs for the Radio Pula.

The way my grandparents were singing was an example for me of the harmony and union between a couple. My grandfather was leading and my grandmother following him. They enjoyed singing and used to sing mostly for friends. 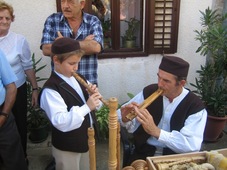 The most famous Istrian instrument is “rozenice”, a kind of flute, producing a tone similar to oboe, played often in a pair, the small and the large, in a thin and a deep thick sound, popularly named “na tanko i na debelo”,  thin and thick like for singing.

Most Istrian instruments originate from wood-wind instruments. Besides “rozenice” there are the bagpipe, partially made of animal skin, sopile, as well as various kinds of single and double pipes called duplice. 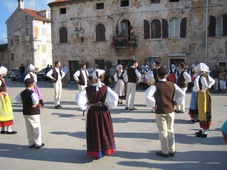 There are various Istrian dances but the most famous is "balun". The peculiarities of balun represents the dancing steps performed by stepping the rhythm and the spinning round of dancers in couples.

If you visit Istria it is very likely that you will have the opportunity to hear the sound of “rozenice” and to see the balun dance. There are various hand made fairs in Istria and if you are lucky you may find hand made rozenice that could be a perfect souvenir from your stay in Istria.

There are two people in the recent Istrian history that have contributed to record the knowledge of Istrian traditional music: Renato Pernic and Dario Marusic.

Renato Pernic was the person that spent his life recording various singers all around Istria and thanks to him a lot of people can still hear their own grandparents singing on the radio from time to time. He also used to record my grandparents and I had the opportunity to meet him in my grandparents courtyard.

The other person is Dario Marusic; for sure the most respected Istrian ethno musician. He plays various instruments and is also composer of the traditional music.