Sovinjak is another typical Istrian medieval small town located on a hilltop above the Mirna river valley. Historically this village was likely the place that provided the wife of the Emperor Augustus with its preferred wine. It was also the place with the first bauxite mining site in the World. Today is a lovely site with beautiful views. 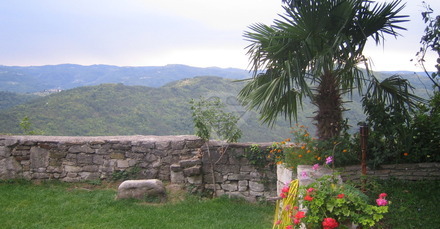 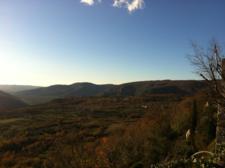 On the road that goes from Buzet to Buje you will find the indications for Sovinjak on your left side. After two kilometres of a steep road you will arrive to 293 meters high hilltop where Sovinjak is located.

It is interesting that the fame of this settlement originates from the time of the Roman Empire. On the place of current Sovinjak there was a Roman fortress named Pucinum. Plinio the Elder wrote that Livia Drusilla, later on named Iulia Augusta, the wife of the Emperor Augustus and mother of the Emperor Tiberius, was drinking exclusively the wine Pucinum from Sovinjak. 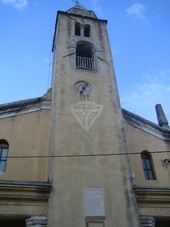 Plinio the Elder wrote: ”Julia Augusta lived to her 85th year of age by merit of the wine Pucinum; and drinking only that wine, whose grape grows in the Hadrian’s Bay, not far from the spring of Timav, on a rocky hill…”

Once you arrive with a car in Sovinjak you can park it on the plateau under the shadow of some centuries old trees on the left side of the Parish Church of St. George.

The Parish Church of St. George was built in 1557 and restructured the last time in 1927. The bell tower is from 1557, as testified by the glagolitic inscription on it. 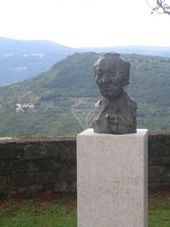 From the plateau there is a beautiful view towards nearby Istrian hilltops and Mirna valley. On the same place you will see the sculpture put there in honour to Slavko Zlatic.

Slavko Zlatic was one of the most important Istrian musicians and composers and was born in Sovinjak in 1910.