On the other side of the Parish Church there are two old hackberry trees. One of them was named the Assembly tree.

It was a habit in Istria to hold Zupan’s, the County Perfect, meetings under this beautiful trees. The old castle was located in the place where today cemetery is. The town had town walls and two gates. Almost nothing has remained of the old town walls.

In front of the old hackberry trees there is SANTA-TERRA restaurant. This restaurant has a particularly lovely garden with a yellow old country wagon parked inside of it. It has even more beautiful view over the Istrian landscape from the tables set under the porch where you can taste some good Istrian food.

Near to the restaurant on the left side you will see a particular house with a neo-classical façade. Following this road you will find various interesting buildings under restructuring. At the end of the village, in the eastern part of the village, there is a typical small Istrian church with a porch. This is the Church of St. Rock dating back into 15th  century with some frescoes paintings inside. 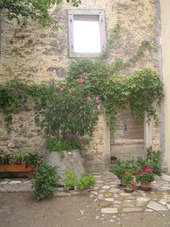 If you take the opposite road, to the right side from the restaurant, you will see some nice and recently restructured houses and other nice buildings under restructuring. There is also a very particular court-yard with flowers and with no windows.

In Sovinjsko Polje you can try very good Istrian food in a tavern that is also a truffles house. Sovinjsko Polje is few hundred meters below Sovinjak and you can arrive to it following the road that pass nearby the Church of St. Rock. The tavern that you should look for is named Toklaria. This was once an oil-mill and is run by the family Sirotic.

Toklaria has gained the reputation to be one of the most exclusive restaurants in central Istria and it offers a combination of traditional culinary art and new gastronomic dishes. In the tavern you should have the possibility to taste Damir Sirotic’s top quality Istrian wine and olive oil. Damir Sirotic’s wine and oil are among the best one in Sovinjak area. 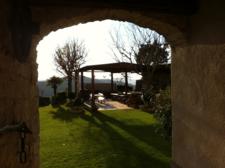 Another interesting fact related with Sovinjak area and its history is the information that in 1566 in a small village near Sovinjak and nearby the river Mirna was opened the first bauxite mining site in the World. At the time was not named bauxite but is known that the property of this mineral was published in 1808, 13 years before it was “formally discovered” in the French village Les Baux in Provence. The name of this mineral derives from this French village and bauxite is used today in the aluminium industry.

In Sovinjak’s photo gallery you will find some pictures of this lovely village.

Like many other Istrian towns and villages also Sovinjak was the prehistoric hill fort settlement. It is assumed that the origin of the name Sovinjak has Celtic origins. Later on during the Roman period it was a Roman settlement probably named Pucinum.

There are no historical documents that testify Sovinjak’s history before 1064 when Henry IV donate Sovinjak to Marquis of Istria Ulrich I  of Weimar-Orlamunde. In 1102 his son Ulrich II donate the village to the Aquileia Patriarchs and later on the settlement changed different rulers.

In 1374, when Alberto IV Count of Pazin died, Sovinjak became part of Austrian Habsburg family. In 1421 was occupied by Venetians and turned back to the Hapsburg family. They gave it to Ruespacher family in 1423. In 1463 Sovinjak suffered a war devastation and very few people remained to live in the village. A written document from 1498 testify its German name at that time Sovinackh.