Tar is located on north of Porec about 52 kilometres far away from Smrikve. This place is known in Istria for its olive oil. Zuzic family is among the top quality Istrian olive oil producers. Very little of historical architecture has been preserved in Tar. There is an old palace that might be restructured soon and add beauty to the village. 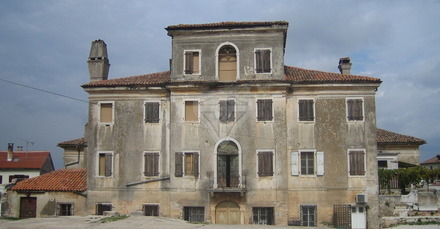 Historically, Istrian olive oil was considered the best olive oil in the whole Roman Empire. It is assumed that at that time Istria had almost three times more olive trees than it has today.

Some historical findings testify that some bigger Villas Rustica, country side complexes, built by Romans used to have several oil mills on the property and in one site were found over 30 big amphorae, with a capacity of 1500 litres each. This big amphorae were used for the storage of the olive oil and it gives you an idea of how big the olive trees areas at that time were.

Even today Istrian olive oil is among the finest olive oils in Europe and the World and many people in Istria during the last decade turned back to this old Istrian tradition.

There are no many historical buildings to be visited in Tar. When you arrive in the village there is a huge abandoned architecturally interesting building. Historically this building belonged to the Countess of Tar and over time was abandoned.

Recently I read in the newspapers that the building should be restructured but people from Tar could hardly agree what could be the future use of this building.

Probably a floor of it should be arranged for an olive oil museum that could help people from Tar to promote their olive oil tradition. The building is huge and various interesting activities could be placed in it.

It is a nice and symmetric building that could look well after the restructuring. On the left side the building have a well and on the limit of the right side of the same there was an olive oil mill.

During the visit of Tar I was making pictures of this building and an older men came near to me and asked me why do I picture this cemetery? He was very said to see this building in this condition because he remembered the times when it was an important building and he added that is so said to see such a beauty without the owner that could take care of it.

Not far away from the Countess’ building on the top of the hill there is the Parish Church of St. Martin from the 18th century. The church has a neoclassical façade and a bell tower.

Tar lie on a plateau at a height of 112 meters above sea level and from its bell tower on a clear and sunny day even the bell tower of St. Mark in Venice can be seen. There is an inscription on the church that remind the arrival of Pope Pius VII in Tar in 1800.

The Pope was travelling from Venice to Pesaro and was forced to interrupt the trip because of the strong wind. He stopped near Tar and casually visited the village.