Dvigrad is located near Kanfanar, in the Lim Bay. Dvigrad and Kanfanar could be considered sort of twin towns. Kanfanar was founded by the people who abandoned Dvigrad in the first half of the 17th century. In that period Dvigrad was destroyed by Uskoci and not many years after was hit by plague. In just few decades the life in Dvigrad completely died. 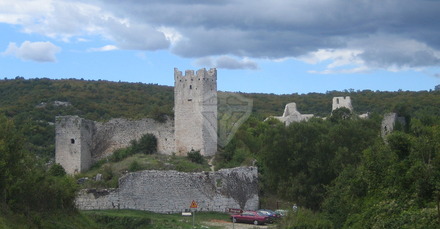 Kanfanar is today famous in Istria because organize traditionally a competition in electing the most beautiful “Boskarin” on St. Jacob’s day; in Istrian known as “Jakovlje”.

Boskarin is autochthonous Istrian ox. It is one of the protected animals in Istria and is considered to be one of the oldest cattle species in Europe. It is huge and impressive.

It can reach over 1.300 kilograms and Boskarin remains the symbol of Istrian man’s hard work on the land.

The agricultural industrialization brought Boskarin to the edge of extinction but owing to the government intervention the Istrian Boskarin might be saved.

When I was a kid I used to go with my grandfather Mate and uncle Drago to the most important animal fair Bartulja in Zminj. I remember that at the time it was possible to see Boskarin’s beauty among the other animals.

Only few decades ago almost every Istrian family in the countryside had Boskarin in house. It is incredibly strong and hard working animal. For centuries he contributed to maintain the buity of the Istrian countryside. Another impressive Boskarin’s characteristic is how he listen to the men. It seems when you look at him while he works that he knows how to help the men to plough the land.

Today it is very rare to find it and an opportunity to see it is during the St. Jacob’s Day when various Boskarins from Istria gather to compete on the election of the most beautiful one.

There is a Greek myth on how Europe got the name and the ox played an important role in that old story. Boskarin could become part of the story if Istrians would have an interest to bring it to the present times. Probably even many Europeans do not know the myth and Boskarin could be an interesting and easy way to remember it. 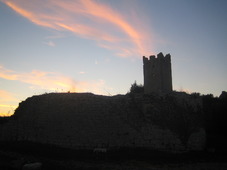 According to this old Greek myth there was a Princes Europe playing with Princes Asia.

They were both playing and collecting flowers nearby the sea, close to the city of Tiro in todays Lebanon, when God Zeus transformed him self in ox and took away the Princess Europe to the current European continent. He left her in Europe and this way Europe’s got its name. This  is very shortly the myth about Europe’s name origin.