Dvigrad – Duecastelli: ”In Greek myth God Zeus transformed him self in ox and took away the Princess Europe to the current European continent“

Life in Kanfanar is the continuity of Dvigrad and they already organize the annual gathering of Istrian Boskarins and this could become a nice and important event to promote Istria in Europe and the event that is already organized every year in Kanfanar could be a starting point for the election of Europe. For sure Boskarin would get new visibility and would be safer from the possible extinction.

Driving with the car from Kanfanar to Dvigrad on your left side you will note if you look carefully a stone wall. This are the ruins of the St. Petronilla Monastery from the 12th century. It is assumed that St. Romualdo was the founder of this Monastery. He lived hermit life for few year in a cavity in the Lim Bay. 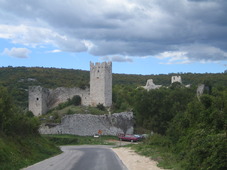 When you arrive with the car in front of Dvigrad you will be impressed by its preserved defence towers and the town walls.

The right tower is bigger and better preserved but also the left tower is very big once you  walk nearby.

There is a large parking place nearby the town walls and you can start the visit from the main town Gate that is still delimitated by two pillars. 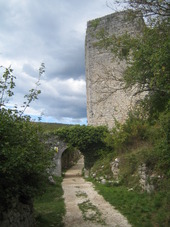 Once you have parked the car, if you look towards south, that is located on the opposite side of the main town gate, you will note the roof of the small Church of St. Anthony the Abot from the 15th century. If you followed the very narrow road made by people you can arrive in front of it and have a beautiful view towards Dvigrad.

When you pass the fourth gate you will be in the old town. There is a small street that you can take on your right side that will bring you to the main square of Dvigrad. 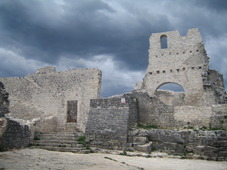 Once you arrive in the main square it is interesting that the whole square is placed on the rock. This is the largest Istrian square on the rock.

On the north side you will note few stairs that leads you towards the ruins of the old Church of St. Sophia.

The church was built in the 11th century on the site of an older church from the 7th – 8th century. It is assumed that on the same place there was an even older one from the 5th century.

Most of the ruins we can see today dates back into the 13th century. The Church was ruined in the 19th century but its walls are still resisting the time.

On this square there were several important palaces five centuries ago. There was the Municipal palace, Podesta’ palace, “fondaco” – a granary storage house, and Venetian pillar from 1475 was standing in the middle of the square.

You can continue to visit the ruins of the old town that are made of over 220 houses.

It is interesting to note, inside the houses, how people created spaces in the walls to hold the things that were used in the house.