Try to imagine before reading this part of the text that you are staying in Konoba Smrikve nearby our fireplace… tasting a glass of our wine… and the story about Istria can start... 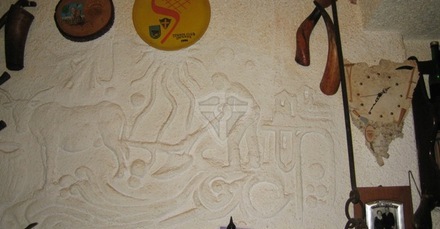 The cultures that have succeeded one another in Istria over the millenniums have left traces in many Istrian places.

Today we can visit some of these places and feel the bygone  times.

The first inhabitants that we should remember are dinosaurs that stamped their still visible footprints along the Istrian coastline and on the Brioni islands.

When the climate became suitable for the human settlement the Istrian caves hosted the first people.

The Cave of St. Daniel at Sandalja was home of the first Istrian inhabitants over  250000 years ago. 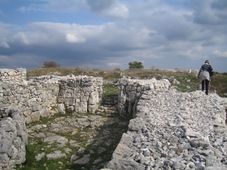 Later on the Istrian territory was suitable for building the prehistoric hill-forts using the dry stone techniques you can see in Monkodonja.

Even today we can find in fields all over Istria the small circular stone houses with a slate roof called “Kazun” that preserved the dry stone techniques of the old times.

Typical corbelling first emerged as the construction for sanctuaries around 5000 BC.

The corbelling allowed the creation of enclosed spaces than the Etruscans introduced the arch and the Romans developed it further into spatial constructions called the cupola. 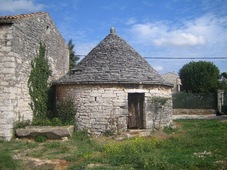 “Kazun” is a very interesting example of this drystone shelter architecture that can be encountered from Scotland to Egypt and from Spain to Greece.

Professor Borut Juvance from Slovenia made an extensive cross border research about various types of drystone shelters and he found that you can find similar constructions to Kazun mainly in Mediterranean countries and also in northern Europe.

The types of different drystone shelters that you can find mainly in Mediterranean countries and also in northern Europe similar to the Istrian Kazun are: