There are various instruments that people used to produce sounds that have been used for centuries in the traditional Istrian music. I will made a focus on type of instruments classified by Dario Marusic as aerophones and chordophones that are the most used one in todays Istrian traditional music. 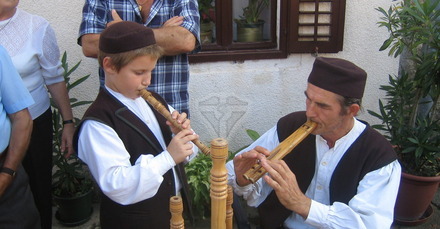 During your visit of Istria you may enter in contact with this instruments. Dario Marusic also put near the instrument the various names these instruments have in various Istrian languages and dialects. 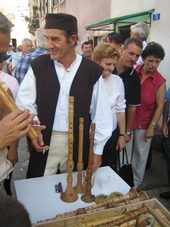 The aerophone instrument that is closest to this instrument are the Renaissance and Baroque schalmey (especially the German bomhart). Sopele are made in two sizes and are usually played in pairs. Small sopele can also be used to accompany the singers.

There is a great number of active players today, thanks to the revitalization programs made by Radio Pula in the 1960s and for sure sopele are the most representative Istrian instrument although bagpipes and the double flute are more spread over the Istrian territory.

Bagpipes pive or surle; also named: surle, tutule, tuture, male rozenice – in Croatian; and pive – in Italian. Surle and pive are the same instrument. The difference is the facth that surle do not have the bag.

Bagpipes or mih – misnice; also named: ludro – in Italian, Croatian, Slovenian; mih, mihur – in Croatian; pive – in Italian; meh z rozenicam, mih, mih na misnice – in Slovenian; folele – in Istro-Romanian. A different kind of Istrian bagpipes is an instrument used by the Croats. The Italians used it only in Sisan, and the Slovenians on Cicarija. 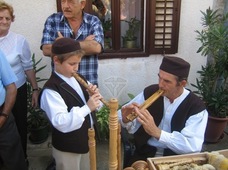 Roc is famous for the “International Festival of Diatonic Accordion Players”. This kind of diatonic accordion is popularly called in Istria “triestinka”.

The greatest number of accordions came to Istria from Trieste and this is the reason why it is popularly named “triestinka”. Ploner is the name of the most famous family that builds this type of accordion.