Kascerga is located in the central Istria. You can reach this village by taking the direction of Trviz on the old road Pazin - Motovun or driving from Zamask to Trviz. Kascerga was historically named Villa Padua and several centuries ago there was a famous popular frescoe painter native from this village, known as Anthony from Padua. 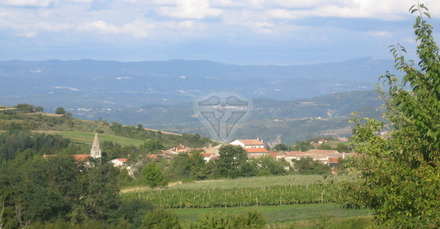 Kascerga is the native village of one of the most important Istrian frescoes painter Anthony from Padua who painted in 1529 and in 1537 the small Church of St. Rock in Draguc. I was interested to see the village where he grew up.

I remember when I visited Urbino I had the opportunity to visit the native house of Rafaello Sanzio.

I also remember that I was impressed with the beauty of the house and I thought that if you grow up surrounded with such an environment it is more likely that you will develop your beauty skills. 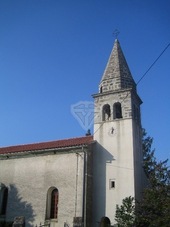 Not much has remained from the time when Anthony from Padua lived in the village. The new road that goes trough the village mix with the older houses.

The Parish Church of St. Mark that is among the oldest buildings was built in 1686, many years after Anthony from Padua lived in Kascerga. The nature and countryside around Kascerga are still pretty like most other parts of central Istria.

Kascerga, like many other Istrian towns and villages, was a prehistoric hill fort settlement and was a settlement during the Roman Empire probably named Castellica. The village had several different names during its long history.

In the 9th century was known as Caschierga or Cassierga. It was named Carsiga and Casser in the Middle Ages and at the end of the 14th century was named Kasternn, Karstgigkl and Kasterg by Germans.

In 18th century was also named Kaiserfeld and Villa Baronia in honour to Baron family Rampelli and the family Dell’Argento. In 12th and in the 20th century, during Italy, was named Villa Padua.

Padua is the name of the 444 meters high hilltop above Kascerga. It is assumed that there was the castle of the Baron family Rampelli. Today there is a Church of Our Lady of the Snow built in 1859 on the place where a few centuries older church was.

The first written document about Kascerga dates back into 1177. At the time Kascerga was split in three areas: Valda, Carsiaga and Padua. At the beginning of the 12th century, German Emperor donated Kascerga to the Aquileia Patriarchs who gave it in feud to the Bishops of Porec.

In the 13th century the rulers were Counts of Gorizia. Matilde Countess of Pazin. His son Mainardo later on donated Kascerga to the Monastery of Sv. Petar u Sumi. This act of donation is not clear because later on different rulers have changed but Kascerga was always dominion of Counts of Pazin.

In 1508 and 1509 Venetians occupied Kascerga but after 1523 they returned it to the Counts of Pazin. In 1531 Martin Kastmann bought Kascerga.