Nesactium was an important town in the Istrian history. It was the capital of Histri’s tribe. Histri were one of the tribes that lived in Istria before Roman conquered the peninsula. The final battle of the Roman's conquer of Istria, in the 2nd century B.C., happened in Nesactium. 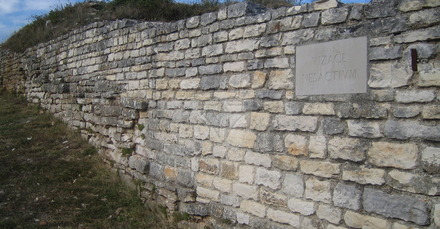 It is one of the most important prehistoric Istrian hill fort settlements because in the Illyrian period Nesactium became the main political and religious centre of the tribe Histri. It is likely that Nesactium was the only prehistoric “town” in Istria. 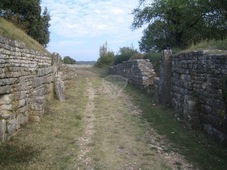 Once you arrive in Valtura, nearby the Parish Church of Our Lady, just take the narrow road that turns left and you will arrive in front of the main gate of this old town.

Extensive archaeological research were done around 1900 and continued for several times during the 20th century. There are many archaeologists that have worked during the century on Nesactium. Some of them are: Puschi, Sticotti, De Grassi, Mladin, Mlakar, Marusic, Jurkic and Kristina Mihovilic.

A part of the ruins that we can see today also a large Histrian necropolis of cremated burial remains with numerous ceramic urns and rich burial offerings of imported painted vessels were found. 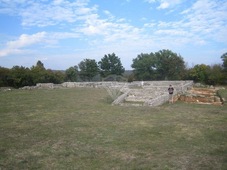 The oldest objects that were found dates back in the 11th and 10th century BC.

It is interesting that most of the objects found from the 9th – 6th century BC belonged to the other Mediterranean cultures, like the Greek one, with whom Histri had trading relations.

Nesactium is located two kilometres far away from Budava. Budava was the port used by Histri tribe at the time.

There were also found two very interesting stone sculptures: the fertility divinity and knights divinity. This sculptures are considered unique in the whole Illyrian – Balkanic area.

There is a small museum building in the middle of the settlement, but most of the discovered objects are kept in the Archaeological Museum of Istria in Pula.