The Lim Bay is an unusual geomorphologic phenomenon located on the western coast of Istria between Rovinj and Vrsar. The Bay is famous for the fact that St. Romualdo lived for several years in a cavity after founding few Monasteries in Istria. 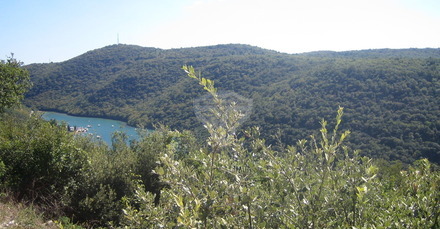 This 12 kilometres long and 500 meters large sea bay is similar to Norway’s fjords although it have not been formed as a fjord. Its shores steeply rise into the heights for more than a hundred meters. It is probable that this phenomenon was created by the once existent flow of the river Pazincica which today is an underground river. The total length of the valley together with the bay is over 35 kilometres.

Lim Bay is today a tourist attraction. This protected natural monument is also a place where oysters and fish farms of gilthead and sea bass are cultivated. It is interesting that also the Romans used the Lim Bay for the cultivation of oysters.

Later on fishing in Lim Bay was managed by Porec’s Bishops for centuries. They were giving their rights to various feudal Lords over time. It is known that in 1691 the fishing rights were bought by Noble family Barbabianca from Koper and they left it in 1782 to the another Noble family from Koper, Gravisi family. By visiting Lim Bay today you have the opportunity to take the boat tour and visit the bay from the sea side.

Lim Bay was inhabited in prehistoric times and numerous caves with traces of life were found along its shore. On both sides of the bay the prehistoric hill forts were built in Illyrian times.

During the Roman period the Lim Bay was the “limes” or the border between Porec and Pula and is likely that from that word the bay got its name. Kandler assumed that the old name Laime could have derived from the word Lama or Laima where in Greek the word Laime and in Latin the word Lama are the equivalents of the word lake or lagoon.

There is a cave in particular in Lim Bay that is interesting to be visited. This cave over time has became a tourist destination and is famous for the fact that St. Romualdo lived for few years in it at the beginning of the 11th century. He lived there until 1005.

Romualdo started to live in another cave that is named St. Romualdo cave and is located near the sea shore in the northern part of the bay but in that cave many people were visiting him so he decided to find another more hidden cave.

To visit this second cave, more properly named cavity to make a difference with the first cave, or cavity, you need to park your car near the eastern limit of the bay and walk by the road that goes nearby the sea.

There is a description board near the steep road that you have to take on your left side that enter the wood. It will take you over 20 minutes walk until you pass the distance of over 370 meters till the cave.