Galizana is a small village located on the old road that goes from Pula to Vodnjan. This village was historically an important Roman agricultural settlement and today is known for its excellent bread and for one of the biggest Istrian's "kazun" - a circular ground-plan houses with roof of stone slates. 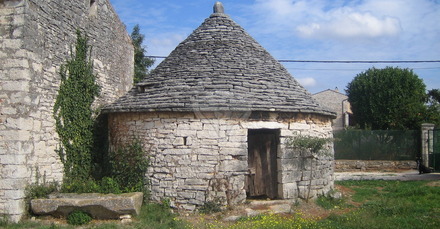 On the road that goes from Pula to Vodnjan you will note the indications to turn right towards Galizana after several kilometres. Once you have left the main road you will be in the area where Moscarda’s family “kazun” is located.

You should ask people to show you the way how to reach this building because there are no indications how to reach it.

There are many “kazun”’s, dry stone made houses, in the southern Istria. They were probably used as shalters and this one in Galizana is so big that people could have used it for living in the past.

In fields all around Galizana and Vodnjan you can find many of this small circular ground-plan houses with roof of stone slates called “kazuni” that remained the dry stone techniques of the old times.

In reality this ground-plan houses named in Istria kazuni can be found in Greece, in Provence in France, in Puglia in Italy are named trulli and can be found also in some other places in Europe like: Cataluna and Galicia in Spain, Abruzzo and Sardegna in Italy, and also in Irland and in Scotland. This made me think that only the Roman civilisation could have been able to built such houses, in such a huge number and with such a beauty.

There are so perfect that today, a part from Branko Orbanic and few other people, almost nobody can do it. Only around Vodnjan there are over 2000 of this ground plan houses with roof of stones slates. There are not spread all over Istria but only in parts that were cultivated during the Roman Empire period.

Dado Belci recently told me a nice story that when he was a child, in 1982, his father and uncles built the first new “kazun” after the second World War. He remember that time that they used a huge amount of stones and the TV pictured the event so you can see the technique they used to build it.

To see this “kazun” you have to take the new raod that connect Vodnjan to the highway “Y”. Passing the bridge named Galizana, in that the middle of the olive trees, you may be lucky to see it.

Istrian olive oil was one of the best in the Empire and there were several millions of olive trees in Istria. At the time this houses were needed by the workers for various reasons.

After the visit of the biggest Istrian kazun, you can continue to drive until the first cross roads where you need to turn left towards the centre of the village. You will see many interesting houses but the village needs major restructurings efforts.

You can park the car in the first small square you find nearby the main road that pass through the village.