Galizana – Gallesano: “Giocondo Petris palace from 1676 is the most representative secular building in the village””

There are few interesting old Baroque palaces that you will note easy and the first old building you will see is located in the first street that turns left after the small square if you arrive from the place where the big kazun was located. It is the Church of St. Anthony from the 10th century. 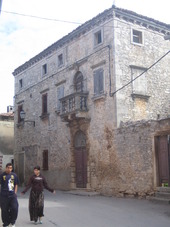 On the main street towards the Parish Church you will note also one of the most attractive Galizana’s palaces: the Giocondo Petris palace from 1676. You will recognize it for its Boroque balcony on its main façade.

Another interesting building is located in the first street that turns left after the Church of St. Joseph. 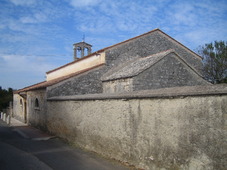 This quite large building is the Church of St. Justus that was made in the 9th century and later on restructured and expanded in the 14th century.

To reach the last historical building you need to turn back to the main road where the church of St. Joseph is located and follow the main road for another fifty meters, than you have to take the road that goes right and cross the railroad. After the railroad continue to follow the road that goes left and you will arrive nearby another old Church “La Concetta” from the 12th century.

Galizana is another very old Istrian settlement. It is likely that was inhabited since prehistoric times. All the southern part of Istria was urbanized by Romans and divided into areas “saltus”, “centuriae” and “sors”.

The village Galizana developed in a “sors” that probably belonged to a Roman military commander of “gens Gallia”. The latin name of the village was Gallicianum that during the Middle Ages, in 1150, changed in Balisanum and later on in Golisani. In 1303 was named Calisanum.

The village is mentioned for the first time in 990. It is likely that Galizana was a feud of Pula’s Bishops already in the 9th century. In 1199 Galizana was given in feud to Ruggero Morosini that was also at the time Podesta’ of Pula. From 1300 the village was part of the Aquileia Patriarchs dominions in Istria.

Later on Galizana followed the destiny of Pula and Vodnjan being part of the Venice Republic.

Galizana and Vodnjan are among the very few villages in southern Istria that maintained the Istro-Venetian dialect and Italian language.

In 1991 with the fall of Yugoslavia and the founding of the Republic of Croatia, the internal republic boundaries were recognised as the state boundaries and Galizana is today part of Croatia.