Labin is another lovely Istrian town located on 320 meters high hill top on the eastern side of Istria, about 44 kilometres far away from Smrikve. Labin is mostly famous as the birth place of recognized Protestant Lutheran reformer Matthias Flacius Illyricus. In addition it is a town with many interesting Baroque palaces. 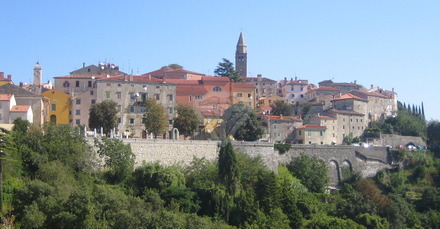 The area of Labin was important mining centre and also the old town of Labin is in part placed above the coalmines. Basically the whole old town was endangered by the possible caving in of the earth.

In 1972, the mining of coal was stopped and also the subsiding of the earth was stopped. This decision preserved the old town and enabled the restoration and the revitalisation of it that continues even today. 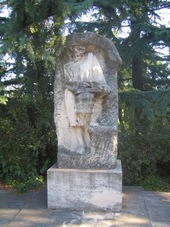 Once you arrive with the car near Labin, continue to follow the indications for the centre of the old town. On the left side of the street you will note the small stone made Church of Saints Cosmas and Damian from 1450 with a monument made by Mate Curljak in honour to Matthias Flacius Illyricus.

Church of Saints Cosmas and Damian belonged to the family Depangher and from the beginning of the 20th century to the family Schira.

Depangher family were the successors of Manzini family. 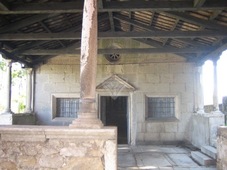 On your right side, on the top of the hill, you will see the old town. Follow the street that takes you towards the hill top.

If you look carefully on your right side, nearby the road, you will note a Church of St. Mary of Consolation that was built in the 15th century.

This church has a beautiful stone made façade with a rose and a typical Istrian porch with stone columns in front of it.