Lovran is an old settlement located on the old Roman consolar road in the eastern part of Istria. The massif of the Ucka mountain overlooks the coast and falls steeply towards the sea thus Lovran was developed by Romans on the shore. During the Austro-Hungarian period started the development of Lovran as a touristic destination. 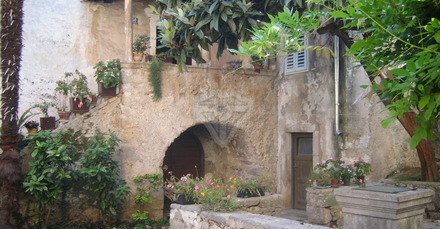 Lovran is one of the oldest towns that developed on the shore, mostly because in this region Ucka’s mountain steeps fall a bit more gently towards the sea.

This eastern coast of Istria has been traditionally called Liburnia relying on the old historical designation for the space from Rasa river towards the east which was at one time settled by the Liburnian tribe.

The old Roman road via Flanatica that was connecting Pula with Tarsatica (today Rijeka) was going a little bit above this area and the Roman name for Lovran was Laurentum.

When you arrive in Lovran, before you reach the old town and the old port, you will note many pretty Austro-Hungarian buildings. Following the wave of Opatija’s  tourism development Lovran also become one of the best known tourist destination in the Austro-Hungarian Monarchy.

At the beginning of the 20th century a notable guest of Lovran was Karl Lueger, the Mayor of Vienna. In that period Lauran had a tram like Opatija.

Even today this area is one of the most significant tourist locations in Croatia. Beautiful houses, parks and long promenades along the seacoast characterize this area.