From Laurana you can walk along the sea all the way to Opatija, and this is one of the prettiest walks in Istria and some people say in the World.

Lovran is a very old town. Like many other Istrian towns and villages, also Lovran was a prehistoric hill fort settlement. It is mentioned for the first time by Marcomirus in the 7th century as Lauriana.

Romans used to call it Laurentum due to laurel plant that grows in Lovran. Laurel plant is “lauro” in Italian and “lovor” in Croatian. The various names that Lovran had were: Laurentum, Lauriana and Lauran or Laranne.

It is possible that Roman general Marco Vispanio Agrippa, who married with Emperor Augustus’s daughter Giulia, established a summer residency in Lovran and was among the founders of the Roman Laurentum.

A part of being famous for the laurel plant, Lovran is also famous, since the 16th century, for the chestnuts. Chestnuts has remained important for Lovran until today and every year in autumn (“Lovranski maruni”) are part of the local cuisine. There is also a very nice festival organized every year.

There was only a short experience of the Napoleon rule at the beginning of the 19th century and later on, for a century, Lovran was part of the Austro-Hungarian Monarchy.

After the First World War, Lovran, became part of Italy and after the Second World War part of Yugoslavia (Croatia).

In 1991 with the fall of Yugoslavia and the founding of the Republic of Croatia, the internal republic boundaries were recognised as the state boundaries and Lovran is today part of Croatia. 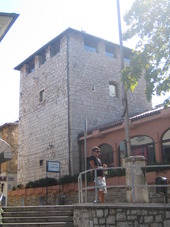 Parts of the medieval fortifications have been preserved in the walls of the houses that make an oval circle all over the old city. Well preserved are also the town gates Stubica which are located in front of the sea and in front of the old port. Not far away from this town gate there is a small Church of St. Trinity, built in the 14th century. It has the typical architecture of the small churches with a porch that you can find in many places spread all over Istria.

Few hundreds meters from the Stubica town gate there is a larger entrance to the old town that brings you to the main square of the old town. You will pass by the defence tower from the 13th century on your right side.

On the left side you will see the Parish Church of St. George from the 12th century. This church was completely reconstructed in the Gothic style in the 14th century, while the net like grooved vault of the sanctuary was built around 1470. In the 18th century the church was given a Baroque style by an addition of a number of chapels and by the construction of a new façade.