Sv. Petar u Sumi is located in the central Istria. The easiest way to find it is to take the old road that goes from Zminj to Pazin. This village is famous for its Pauline Monks monastery that hosts one of the most interesting Istrian cloisters. The current name of the village derives from the name of the Monastery. 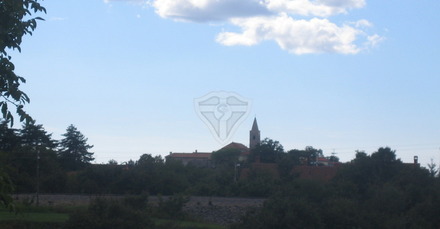 To visit the Monastery, once you arrive in Sv. Petar u Sumi, just drive towards the bell tower of the Church of Saints Peter and Paul. Originally the bell tower had the Romanesque character but the current aspect dates back into 1752, while the top of the bell tower was added in 1880.

The church was originally built in 1134 but the current shape dates from 1731. 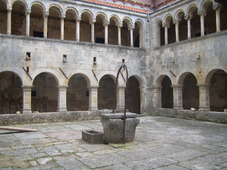 In front of the Monastery there is a large square with several centuries old hackberry trees. The Monastery complex on the left side of the church has been restructured while the other side, where also the cloister is located, is under restructuring.

There are some other buildings on the southern part of the square where only the walls of the buildings have been preserved. On the opposite site of the Parish Church the husbandry buildings can be seen, while the northern part have the open view towards northern Istria.

Sv. Petar u Sumi is located 341 meters above sea level.

The church hosts several interesting art works and the Monastery has a beautiful cloister, that is currently under restructuring. A pretty arcading can be seen in the cloister with Renaissance arches on the ground floor and Romanesque arches on the first floor. 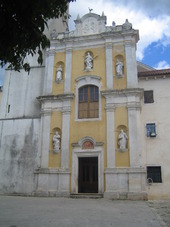 The façade of the church has marked Baroque features while the main building of the Monastery spread a Renaissance’s harmony and simplicity.

The current aspect of the church is the product of various modifications which the Pauline Monks made at the end of the 17th century and during the first half of the 18th century.

The narrow and steep Baroque façade of the church completed in the first half of the 18th century is similar to the other Pauline Monks churches in the northern parts of Croatia.

There are five sculptures on the façade and on the top of the façade there is a big stone made coat of arms of the Pauline Monks order.

The altar paintings were made by the Pauline painter Leopold Keckheisen. On one of the paintings you can see Our Lady from Jasna Gora that is located in Czestochowi in Poland. A seat of Pauline Monks is located in Jasna Gora.