Mali Sv. Andjelo means in English Little St. Angel. This prehistoric site is located in the area nearby Porec. Several prehistoric settlement are located near to this 88 meters high hilltop. The most famous one are Picugi where in 1883 over 500 tombs from the 6th and the 5th century BC were found. Mali Sv. Andjelo is worth visiting for its tholos. 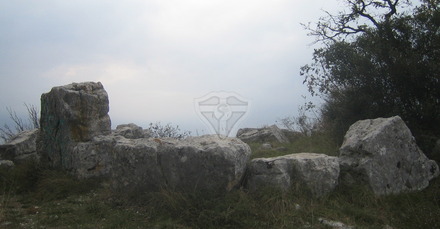 Picugi were inhabited between 3000 and 4000 years ago and some findings from this site can be seen in the Porec‘s museum that is located in the Sincic palace in Decumano street. 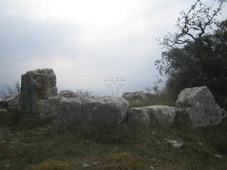 According to the experts Mali Sv. Andjelo was a prehistoric religious site.

The reason why the expert assume that this is the fact that on the top of the hill you will see several huge stone blocks that form a circle.

This is way some people named this place the Istrian stonehenge.

The best way to arrive to Mali Sv. Andjelo is to take the country road that goes towards the village Valkarin. There are no indications of this site so you have to drive carefully and pay attention on your right side where quite a big vineyard is located. Above this vineyard towards east you will note the three hilltops.

About a hundred meters from there you will find a country road that goes towards right and there is a small place where you can leave your car. 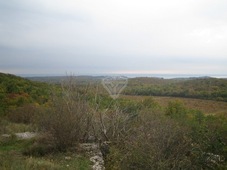 The tholos is located in the middle this three hilltops that you will see on your right side. After few hundred meters you have to take the direction towards the middle hilltop. There is no road to arrive to the top of the hill but once you cross about 60 meters of wood you will be near to the tholos.

In Mali Sv. Andjelo’s photo gallery you will find few pictures of this old tholos and its surroundings.