Trviz is located in the central Istria on the old road Pazin - Motovun. If you are driving your car from Pazin direction you will note the bell tower of the Parish Church of Our Lady of Rosary. Trviz developed on a small hilltop on the right side of the road few kilometres from Pazin. Only few historical buildings have been preserved. 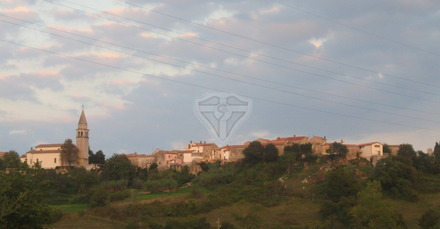 Trviz is located few hundred meters from the main road and if you continue to follow this road you will arrive to Kascerga., where an important Istrian fresco painter was born, Anthony from Padua.

It is interesting that the village bellow Trviz, named Katun Trviski, is known for the greatest number of entrepreneurs in the whole Pazin area.

The villages have not preserved a lot of its antique architecture. You can park the car nearby the Parish Church. The Parish Church of Our Lady of Rosary was built in 1897. The bell tower was made a year before as testified with an inscription that remember Ivana, Antuna i Frana Sironic. 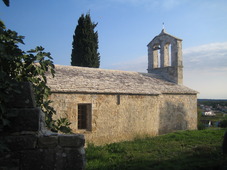 There is another small and very old church in the village. This is the former cemetery Church of St. Peter that dates back into 11th century. Parts of the church, in particular its back, was made later on, in the 13th century.

There are only two parallel streets in Trviz and each one will lead you to the limit of the village where this church is located. The church has been recently restructured and it has a particularly well made stone roof. The frescoes paintings, inside the church, on the southern wall, are from the 12th century. There is also a Glagolitic inscription with the date 1553. The church also hosts an interesting wooden ceiling painted with the images of Saints.

I met a very nice person in the village, an Istrian who emigrated in Australia several decades ago, and he was pleased to show me the village.

Until 1248 Trvis was under Motovun jurisdiction and at that time Motovun was still owned by the Aquileia Patriarchs. In 1248 the feud passed to Kascerga.

In 1342 Trvis was part of the County of Pazin and was named Terveis. It is known that in that year Alberto IV fortified Trvis and built a defence tower to improve his control of this part of the territory. In 1374, when Alberto IV died, Trvis passed, together with the County of Pazin, to Austria and the family Hapsburg. In a document from 1499 Trvis was named Tervis.