Funtana is located on the western coast of Istria near Porec. Its name derives from the two water springs located nearby this village. It is known that during the Roman period the two springs-water were used as the water supply for the Roman Villa that was placed at Cape Zorna. Villa Borisi started the development of Funtana four centuries ago. 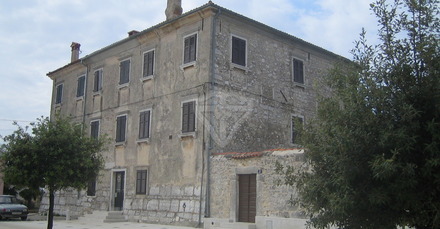 Today local people call this springs of water the springs of friendship because thanks to the tourism Funtana is visited every year by people coming from all over Europe. On the road that goes to Porec on the left side, in the middle of the well cured field, you will see one of the two water springs.

Once you arrive to the 26 meters high hilltop you will recognize the oldest building of the village.

It is Villa Borisi or Borisi castle built by Bernardo Borisi in 1610, a large two floors building that with its back facade looks towards the main square where the Church of St. Bernard with its bell tower was built in 1621.

This Villa would need restructuring investments as most other older Istrian villas and palaces. If you take a look of the building from the frontal side you will note on the second floor the only Baroque feature of the building, its balcony.

In whole the building is very simple and was built as fortification. It is hard to define its style but for sure respects the simplicity of Renaissance symmetry and proportions.

Leaving the village and taking the direction towards north, on the right side of the street you will note the small Church of St. Lucy.

Funtana was inhabited during a Roman period and the settlement was named at that time Fontana Georgiana.

In 1331 the Bishops from Trieste gave Funtana to Andrea Dandonlo. Later on the property passed to Porec Bishops and than to the town of Porec.

In 1595 the feud passed to the Captain of Pasenatico Bernardo Borisi that came in Istria in 1590 bringing several Albanian families with him.

In 1648 Borisi family received the Noble title of Counts and three years later one Borisi was responsible for killing a person of Slav origin. For the next eight years during the trial the Venetian Republic did not allow the family to run the property. At the end of the trial Count Borisi was found guilty but the property returned to his family.

With the fall of Venice, Funtana became a part of the Austrian Empire and for a short period of time was under Napoleon domination. Even after the fall of the Venice Republic the family Borisi remind the owner of the property until the mid of the 19th century.

After the First World War and fall of the Austro-Hungarian Monarchy, Funtana, was part of Italy and after the Second World War became part of Yugoslavia (Croatia).