Klostar is part of this virtual guide because many years ago it was a Pauline Monks Monastery. I was interested in its architecture although the property has changed a lot of owners in its history and has significantly lost its original form. Please consider that before 1930 the Monastery was located on the Cepic lake. 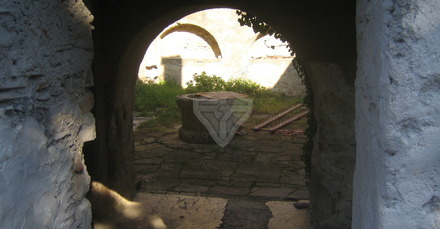 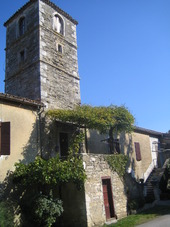 As I wrote the Monastery have lost its original form during the centuries and probably the oldest part of it is the part around the bell tower that preserve the original proportions.

The Monastery was built in the 14th century and the bell tower and the court-yard with the well are still preserved. Parts of the Monastery would need restructuring, while in the other parts people still live in it.

In 1460 the Emperor Federico III donated to the same order the land of Sv.Petar u Sumi where the Monks created another Monastery, bigger and even more important.

Over the centuries Pauline Monks established other monasteries in Istria: near Motovun, Dvigrad and Plomin. The Church of Our Lady of the Lake was the Monastery church and the tombstone of Martino Moyses, later on moved to Belaj, and other tombstones of the Lords of Wachsenstein and County of Pazin were hosted in this church.

In the 16th century the Pauline Monks moved to Sv.Petar u Sumi because the Cepic lake was not any more a very healthy place to live. In 1600 the Monastery passed to Pican‘s Bishops but the feudal rights over the land were belonging to the Pauline Monks.

In 1783 the Austrian Emperor Joseph II suspended the Pauline Monk order and Prince Auersperg bought the Klostar property and moved the tombstones from the church to Belaj castle.