Paz is located in the north eastern part of Istria, on the road Cerovlje - Boljun. The decision to include Paz among villages that are worth visiting was influenced by its historical importance and defence castle. This castle was serving with other castles located in the valley of the river Rasa to defend the border of the County of Pazin. 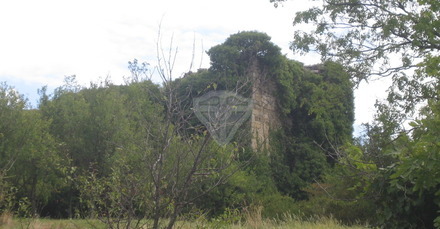 Today the castle is in ruins and arriving with the car from Cerovlje and Gologorica you will see the ruins of it on the top of the hill before your arrival in Paz. The access towards the castle should be cleaned because it is not an easy access to visit it.

The castle was built probably by Federico Eberstein in 1300. In the village there are few houses today and also the road towards Belaj starts from this village. 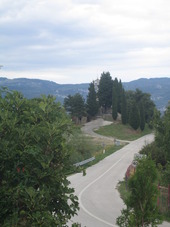 Outside the village there is a cemetery Church of St. Vid built in 1460 with fresco paintings made by Albert from Konstanza. On the walls many glagolitic graffiti are incised. The church hosts also a sarcophagus dating back into 1570 with coat of arms of Walderstein or Walterstein and Barbo family.

It is likely that an old Roman road was passing trough Paz that was connecting Boljun (Ad Fines) and Old Pazin. Old Pazin was located in the centre of Istria nearby todays Pazin.

During the 12th century Paz was owned by Marquis of Istria Ulrich II and was donated with the other Istrian properties to the Aquileia Patriarchs. The Aquileia Patriarchs probably gave the feud to Federico Eberstein that in 1299, in a document, was named Federico of Pas. Pas was the name of the village in that time.

Paz was also known as Passberg, Paspere, Paas and Villa del Cane. It is likely that in the following centuries Paz passed under County of Pazin that was ruled by Counts of Gorizia, Aquleia Patriarch’s lawyers. It is also likely that in 1374 passed, as many other Istrian properties, to the Hapsburg family.

In the 15th century it is known that the owners were Walderstein family that received the feud from the Princes of Austria.

In 1496 Waltaser Walderstein, Vice Captain of Pazin, died and his daughter Barbara was the successor of the feud. In 1527 she married Bernardino Barbo, one of the Lords of Kozljak.

Their son Messaldo Barbo rebuilt the castle of Paz in 1570 as testified by a stone inscription hosted in Belaj. In 1589 Messaldo was sentenced to death penalty in Ljubljana. This sentence was due for the fact he has killed a person.

Paz after Messaldo’s death passed to his three sons and only Sigismond had successors so Giorgio was later on the successor of the feud. In 1695 Barbo family sold the property to Prince Auersperg.

His administrative headquarter in Istria was located in Belaj that also belonged in the past to the Barbo family. During the 18th century the castle of Paz lost its strategic importance.