Brsec is located on the eastern coast of Istria on the old road Plomin - Opatija. What is particular for this part of Istria is that massif of the Ucka mountain overlooks this coast and falls steeply towards the seacoast. Settlements are rare compare to the western coast of Istria and only recently they have developed on the shore. 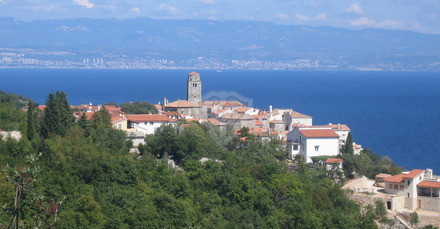 Driving to Brsec you will enjoy the beautiful view towards the Cres island and the Kvarner gulf. It is a really nice view and when you come closely to Brsec you will recognize this typical eastern Istrian coast settlement. 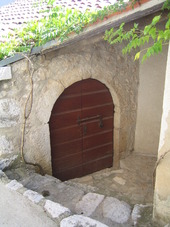 Brsec is situated on a rock that is 157 meters above sea level. This location was important in the past and already in the 6th century it became a fortification village. During the Middle Ages the settlement expanded around the castle like Moscenice.

Nearby the old gates of the town there is a monument made in his honour.

Walking through the narrow streets and vaults of the old town there is a feeling of being in Moscenice. The basic architecture of these two towns is very similar and they are close to each other. They are worth to be visited together.

Once you pass the old town gates you will arrive to a small square with two wells and near this square there is the Eugen Kumicic native house, now home of the “Jenio Sisolski” gallery.

At the village top you will find the Church of St. George dating back to the 14th  century, with fresco paintings from the 15th century.

Outside the the town walls there is a Church of St. Cross.