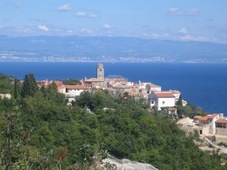 Today Brsec lives mostly from its tourism offer and once it lived from agriculture, wine-making, cattle breeding and fishing. The preserved architecture makes this place lovely and nice to visit. There are several interesting walks: the first one could be towards the Church of St. Magdalene, the second towards the send beach and the last one, and the longest, towards one of the Ucka mount peaks, Sisol (803 meters high).

There are not many historical facts relating to this little town. It has followed a similar history to many Istrian towns. Brsec changed many rulers and authorities over the centuries.

Close to Brsec there is a prehistoric hill fort settlement. The place was inhabited during the Roman and Byzantine periods and since the Middle Ages it followed mainly the destiny of other cities of the Liburnia region.

From this short overview of the historical rulers of this small town it can be understood that Brsec was for many centuries on the border between the Venice Republic and the Austrian part of Istria. It is also interesting to note that although Brsec had the city statute since the 17th century,  the document was never found.

Brsec was for many centuries Austrian dominion. Between the two World Wars it was part of Italy. After the Second World War it became part of Yugoslavia (Croatia).

In 1991 with the fall of Yugoslavia and the founding of the Republic of Croatia, the internal republic boundaries were recognised as the state boundaries and Brsec is today part of Croatia.