Lupoglav is located in the north eastern part of Istria. This location was important in the Istrian history. The formation of the future County of Pazin started from a donation of a village located in this area to a Count of Gorizia. By forming the County of Pazin Istria will split for centuries between Austria and Venice. Border disputes ended up in numerous wars.

I had the interest to visit this village because it was one of the seats of Uskoci army in Istria at the beginning of the 17th century during the war between Austria and Venice. In reailty, the old castle is in ruins and there is not much to see from that period.

In the past Lupoglav was a strategic point for the control of the roads and the old castle was built on a 530 meters hilltop named Ruins Mountain. The name of the hilltop derives from the ruins of the old castle that are located there.

The old castle was built at the beginning of the 11th century when the other castles in the Rasa field were built. The castles defence system was created at the time to defend the eastern border of Counts of Istria. 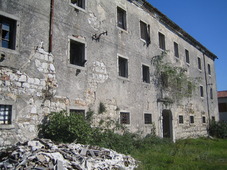 The ruins of the old castle are located not far away from the ruins of the Mahrenfels castle that is the only older building that can be seen but was built in 1646. They are both located on the road that goes from Lupoglav to Brest.

Lupoglav was owned by the Bavarian Archdukes and was named Mahrenfels. Other names that can be found in the old documents are Merinvuels or Mernfels. For the first time in a document that dates back into 1112 Lupoglav is named with its current Croatian name.

In 1111 the castle was donated by Duke Enrico of Baviera to the Aquileia Patriarchs. It is known that in 1264 the feud was given to Enrico De Pisino. In 1280 he was succeeded by his son Anzio De Pisino.

Later on the owners were also Counts of Gorizia and in 1342 was part of Alberto IV properties and part of the County of Pazin.

In 1374, when Alberto IV died, the County of Pazin and Lupoglav passed to the Hapsburg family that gave the feud during the same year to the family Eberstein from Gorizia.

In 1411 after the death of Ana Eberstein, her husband, Gontiero Herberstein, became the new owner of Lupoglav. His successor in 1421 was Andrea, the son of his brother and later on in 1442 his son Giorgio. Giorgio died in 1491 because of a mental illness and the new successor was Sigismondo Herberstein but Lupoglav’s castle was ruled by his brother Giovanni.

In 1508 Venetians in agreement with Giovanni Herberstein occupied the castle and in 1509 Sigismondo Herberstein returned the castle under his command. In 1525, Herbestein sold Lupoglav and other properties in Istria to Archduke Ferdinand I of Austria.

In 1527 Lupoglav was sold to the Captain of Sinj, Pietro Crussich. In 1537 he died in a battle with Turks and the successor was his son Giovanni Crussich.

In 1576 Giovanni died and the castle passed to the wife of Sincovich and his son from the first marriage.

In 1610 the successor Giovanni Sincovich bought the castle. He created from Lupoglav one of the seats in Istria for the support of its army in the Uskoci. In 1616, during the war, he died.