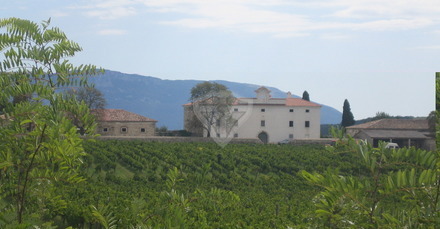 When you arrive from Pazin, on the road that goes from Pazin to Cerovlje you need to turn right near Cerovlje towards Gologorica and continue to drive until you arrive to the village of Paz. In Paz you will find the indication for Belaj. There is a several kilometres long country road.

Once you arrive nearby the palace you will note this beautiful property composed of three big buildings with a huge and old vineyard in front of it. 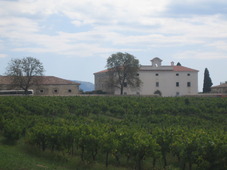 The external architecture of the place is made with clean and simple lines and respect the symmetric proportions of the buildings. Between the main building and two secondary large buildings there is a well on one side and a garden on the other side.

I have not seen the inside of the palace but I read about its beauty. It has a nice court-yard with some frescoes paintings on the walls representing the palace and the countryside around it.

Inside the palace there is also a private chapel dedicated to St. Lodovico with several family tomb-stones and inscriptions.

Moyses’ tomb-stone was in court-yard of the palace and has a glagolitic inscription from 1492 on it. Many years ago this tomb-stone was transferred from the Paulist Monastery Church of the Virgin Mary near the Lake of Cepic into Balaj’s court-yard and later on into this private chapel. 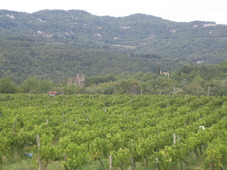 From some written documents I learned that the chapel should also hosts the coat of arms of Auersperg family that was on the façade of the Palace.

Opposite to the Castle there are the ruins of the medieval Posert Castle, also named Schabez, from the 11th century. Nearby the castle there is also the small Church of St. Martin from 1367.