Moscenice is located on the eastern coast of Istria on the old road Plomin - Opatija. In this part of Istria the massif of the Ucka mountain overlooks the coast and falls steeply towards the sea. This natural environment influenced also the town structure. Moscenice is full of steep and narrow streets with lovely vaults worth to be visited. 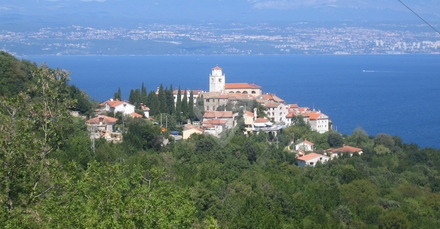 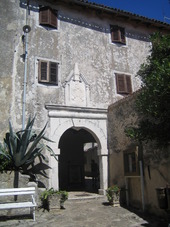 In particular, you will note the Parish Church of St. Andrew and its massive bell tower that dominates the steeps. The view is very similar to the view of Brsec. Moscenice is situated on a rock about 173 meters above sea level. In the Middle Ages the settlement, like in Brsec, expanded around the castle.

When you park the car and arrive near the town gates you will see several interesting historical buildings around you. Opposite the town gates, outside the town walls, there is a small Church of St. Bartol, dating from 1628.

Another small church, that of St. Sebastian, built in 1501, is about 150 meters far, near the road towards Brsec. They both have typical Istrian porch that characterize the architecture of the small Istrian churches. 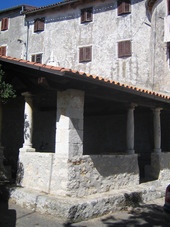 On the left side of the town gates there is the 13th century rectangular castle tower. The outer walls of the peripheral row of houses were built in such a manner as to replace the medieval town walls from the 11th century.

The town gates, dating back to 1654,  bear a nice Hapsburg’s family coat of arms and Near to the town gates, on the right side, the municipal loggia has been preserved. The last time was reconstructed in 1654.

When you pass the town gates you will enter a lovely,  picturesque fishermen’s village characterized by narrow stone paved streets, many stairs and vaults.