It is open for public and hosts several art works, sacral art collection, such as: wood sculptures and paintings made by Moreschi. 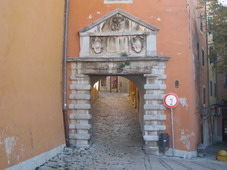 Once you arrive with the car near to the main square outside the old town you will note the Venetian round bastion from 1604. The main old town gates, St. Flora, are located in front of this round bastion. The Baroque style gates were restructured in 1687.

The older gates were from 1587 and the very old one dated back into the 12th century. You will note two coats of arms, a stone inscription and a Lion of St. Mark with an open book above it. In 1587, above the gates, also the Chapel of St. Flora was built. 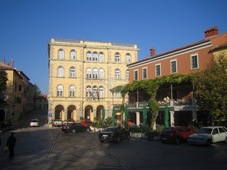 This large square have several interesting buildings. If you do not find the parking for your car on the square, take the road that goes towards south.

The round bastion is located on the northern part of the square so just take the road that continues towards south and after about a hundred meters on your right side you will find the parking place. From there you will have a beautiful view towards the old town.

Once you have turn back in the large square you will note the Velo Kafe bar that is an old Labin’s bar. There is also the Municipality building that close the square on the western side of it. 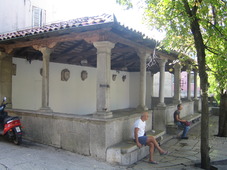 Opposite to the Municipal building you will note the Venetian loggia  from 1662 that has gone through a major restructuring in 1777. A collection of stone monuments from Antiquity to the period of the Venetian Republic is housed in the loggia.

The huge building that you find on the left side in front of the St. Flora gates, that appears in structure, especially in the basement, similar to a defence tower is the Magistrate’s Court building that dates back into 1556. When you pass the gates you can start your visit of the old town following the stone paved streets. Owing to its location on hilly terrain also the urban structure conform to the configuration of the terrain.

Labin has several interesting patrician houses like: Scampicchio palace, Frankovic Vlacic palace, Mazini palace, Negri palace and Battiala Lazzarini palace. Most of the mentioned palaces are from the Baroque period.

There are indications all over the old town with the names of the buildings and my advise would be to start the visit following the more external round street that starts from the small square where the old theatre with tower with clock is placed. It is a building with a neoclassic façade made in 1844. This building was the grain storage house. 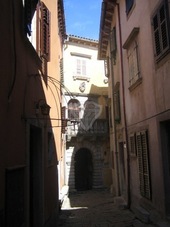 The original building dates back into 1539 and the clock tower was built in the middle of the 17th century. From there take the street that turn left.

It is a nice façade with attractive doorway or gates that allow you to enter into the court yard. Tha palace has a Baroque balcony and a stone made family coat of arms placed above the balcony.