At Smrikve you can enjoy nice and sunny weather, swimming, read books, have long walks by the sea under the shade of pine trees, enjoy extraordinary food, warm and pleasant nights, play tennis, ride bycicle, taste our own and very special olive oil and wine, enjoy our eco garden and animals farm, simply enjoy the surrounding nature and much much more.

Events and people that shaped European history have had much influence in Istria as well. Indeed, evidence shows that Istria had much importance throughout the ages: from the Roman Empire to the recent history.

Many people, especially those coming to Europe from other Continents, that are willing to feel, learn and enjoy the European art and culture choose to visit Italy as their first choice, since Italy has probably one of the richest cultural heritages in the World. Towns like: Rome, Florence, Venice, Urbino, Assisi, Siena never fail to charm a visitor.

There is a big cultural heritage of surprising beauty evident in the World important museums like: Uffizi in Florence, National Gallery in London, Louvre in Paris, Vatican Museums in Rome, Prado in Madrid. 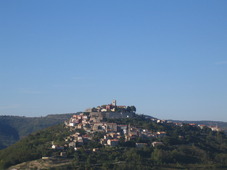 Most of the towns and villages described in Istria from Smrikve are over 3000 years old. When you visit Istria you will be able to feel prehistoric times, the glorious days of the Roman and Byzantine Empires, the Charlemagne kingdom, the Aquileia Patriarchs period, the Venetian Republic, the Austro-Hungarian Monarchy and the more recent times. Tito used the Istrian Brioni islands as his World policy stage from where the Non-Aligned Movement was launched thus insuring the continuity of the rich Istrian culture. All this concentrated in one small region that has a shape of a heart that you may easily fall in love with.

About 200000 inhabitants, beautiful Mediterranean nature, lovely hilltops covered with woods, crystal blue sea, excellent food, olive oil that is considered among the best in the World, outstanding wine, many nice towns and villages that are well worth a visit - most of which are inhabited for over 3000 years. This is in very few words Istria.

Monkodonja, Nesactium, the Arena of Pula, Euphrasian Basilica in Porec, the ruins of Dvigrad, Rovinj, Gracisce, Motovun, Groznjan, Opatija, Hum, Vrsar, Labin, the mummies of Vodnjan, one of the most beautiful Villas of the Roman Empire on the Brioni islands are only some examples of the Istrian rich cultural and historical heritage that should become part of your Istrian itinerary. 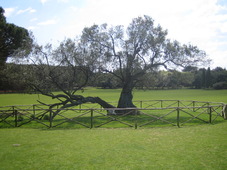 Istrian region was the most prominent during the Roman Empire period, the Early Byzantine Empire, the Venice Republic, the Austro-Hungarian Empire, and also during Yugoslavia, when the Brioni islands, named the “Islands of Peace” and “the State in the State”, were the stage of Tito’s Non Aligned policy.

Although the Renaissance had left only a modest mark on Istria, the five periods mentioned above were the Istrian “Renaissances”. The evidence is embedded in the Istrian cultural and physical landscape. It is likely that Istria could experience its sixth Renaissance once Croatia joins the European Union.

Today, Istria is often compared to Tuscany for its beauty, culture and the tradition of producing olive oil and wine. If you visit Istria you will realise that Istria is simply Istria. Apart from the costal area there are many wine and olive oil trails and numerous farmhouses where you can sample traditional Istrian food.

Throughout the year, and especially in the summer, there are various cultural events held every day in almost every Istrian town.