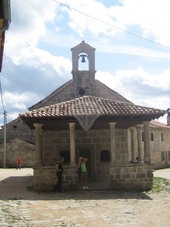 In the middle of the square you will see the Church of Our Lady on the Square built in  1425. It has a typical Istrian porch that you can find on many Istrian smaller churches and it has partially preserved frescoes painting inside.

If you look carefully between the stones on the church you will see many votive nails fastened between the wall stones. This votive nails were placed there as a pledge for curing from sterility and illness.

On the right side of the porch of the church you will see the old stone holder with measures for collecting feudal taxes. 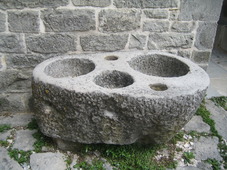 If you go towards back wall of the Church of Our Lady, and take a look towards left, you will see a building with a vault and three beautiful gothic windows.

This is the Chapel of St. Anthony built in the 15th century and this was part of the building complex that was the periodical seat of Pican’s Bishops. Under the vault you will see a door on your right side. 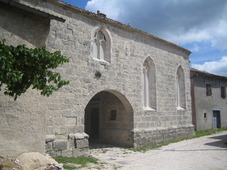 Take the way that goes under the vault and soon after take the first street on the right. From there you will already see the bell tower of the Parish Church of St. Vid built in 1769. All around the Parish Church there are several centuries old trees. This is also the largest church in Gracisce. 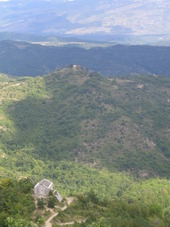 Construction of the three-naved church of St. Vid got under way on two occasions.

You can walk around the Parish Church and enjoy one of the most beautiful views over Gracisce surroundings. You will be on a hilltop, 454 meters above sea level.

There is a wall that surrounds the church of St. Vid and a small iron gate. Once you exit the gate walk near the walls towards left and take the first street on the right. After few meters you will see a frescoes painting on the wall in front of you. Once you arrive near to that wall take again the street on your left side and you will see the oldest church of Gracisce that dates back into 1383. 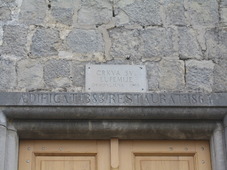 The street that goes right from the church hosts most of the houses built in 15th century.

Dates when the houses were built are sculptured in the stones above the doors of the houses. The street is also named “Pod Svetu Fumiju” that would mean the street “Below St. Euphemia”.

Continue to follow this street, keep going till the end of the village and you will arrive nearby the round defence tower that dates back into year 1500.