Lindar – Lindaro: “It was involved in a battle between Austria and Napoleon army in 1813 ” 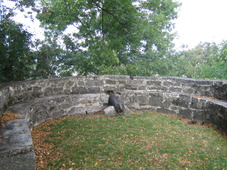 On your left side there is a round defence tower and part of the old town walls.

Lindar was involved in a battle between Austria and Napoleon army in 1813 and the old cannon that you will see in the round defence tower stands there in memory of the victorious battle led by captain Josip Lazaric with his company of volunteers against Napoleon army.

The Lindar’s old castle was located from the round defence tower till the north eastern end of the village behind the Parish Church while the town walls were ending near the Church of St. Catherine.

Like many other Istrian towns and villages also Lindar has been a prehistoric hill fort settlement. It is assumed that the name of the town has Celtic origin. In the Middle Ages was ruled by the Aquileia Patriarchs and later on by Counts of Gorizia. Lindar was part of Pazin’s County.

During the Middle Ages Lindar was part, together with Gracisce and Pican, of Pazin’s defence system. In 1421, 1508, 1511, 1615 when Venetians were in wars with Austria also Lindar was involved on Austrian side.

Lindar was for centuries part of Austrian dominions in Istria and in 1813, Captain Josip Lazaric was able to organize a volunteer army among Pazin’s peasants.

Lazari’c army was made of 47 Austrian soldiers and the peasants. With this army he faced and obtained the surrender of the Napoleon army of 29 officials and 900 soldiers that were going trough Istria with aim to attack Austrian General Nugent army that was based in Rijeka. For this act Maria Tereza of Austria named Josip Lazaric: the Baron of Lindar.

Like many other Istrian towns and villages after the First World War Lindar became part of Italy and after the Second World War part of Yugoslavia (Croatia).

In 1991 with the fall of Yugoslavia and the founding of the Republic of Croatia, the internal republic boundaries were recognised as the state boundaries and Lindar is today part of Croatia.