Oprtalj – Portole: “It was a municipality with its own statute”

During the Middle Ages it developed into a fortified town. The medieval walls of the town have been partially demolished and a good part of these have been built into the town buildings.

From 1420 Oprtalj was under Venetian rule until the fall of Venice in 1797. Oprtalj was a municipality with its own statute.

After the fall of Venice the town was conquered by Austria and later on by Napoleon. After the Napoleon’s fall and until the end of the First World War it was part of the Austro-Hungarian Monarchy and than part of Italy. After the Second World War Oprtalj became part of Yugoslavia (Croatia).

After the second World War Oprtalj became part of Yugoslavia (Croatia). There were three agreements between Yugoslavia and Italy which established that Istria would become a part of Yugoslavia: Paris Agreement of 1947, London Memorandum of 1954 and the Osimo Agreement reached in 1975. In the first decade after the Second World War many Istrians, especially those living in towns and villages that for centuries were part of the Venice Republic, decided to leave Istria.

In 1991 with the fall of Yugoslavia and the founding of the Republic of Croatia, the internal republic boundaries were recognised as the state boundaries and Oprtalj is today part of Croatia.

Arriving from Livade it is recommended to park the car on the car park in front of the school, the nice Neoclassical building near the small Church of St. Rock dating from 1581. Inside the church there are some fresco paintings made by Antonio from Padua (today Kascerga), one of the most important popular Istrian fresco painters.

After few hundred meters from the car park, you will be in front of the main town gates built in 1756. 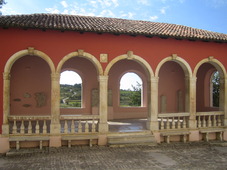 Once you enter the old town, following the street towards left, you will arrive to the main square with the Parish Church of St. George built in 1517. On the opposite site there is a very particular, 27 meters high, bell tower. Inside the church apart from various interesting art works there is a Baroque Bishop’s chair with inlaid decoration and the church organ made by Gaetano Callido at the end of the 18th century. 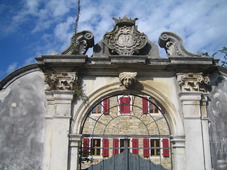 If you continue to follow the street, you will arrive to one of the most beautiful private house doorways in Istria. It is a doorway of a recently restored Villa with two columns, some Baroque motives and a nice coat of arms with a sculpture of a head underneath it.

The coat of arms on the doorway belongs to the Counts Milossa.

Like many Istrian hilltop medieval towns also Oprtalj has a circular structure of the streets, so you can finish your tour arriving at the main town gates.

While exiting the town, on the left side of the road, few hundred meters from the town gates, in the middle of a cypress alley, you will see another typical small Istrian church dedicated to the Little Virgin Mary. The church was built in the 15th century.