Pazin – Pisino: “Is the town where the first Croatian secondary grammar school in Istria was founded in 1899” 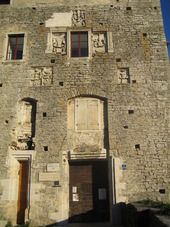 Many years ago, the castle was surrounded by gullies that were filled in during the twenties of the 19th century. The last owners of the castle was the family Montecuccoli that owned the Castle from 1766 until 1945. Above the main gates of the castle there are five coat of arms of five different families.

Three of them are coat of arms of: Counts of Duino, Walsee and de Pisino. The other two are probably of Rab, Schuel or Steindorfer. From 15th  to 17th century the houses and palaces of the prominent families were built in the immediate vicinity of the castle.

There are two other historical building complex that hosts some interesting art works and are worth to be visited: Franciscan Monastery and the Parish Church. You should orient your self by following the two bell towers.

The nearest bell tower to the castle is the bell tower of the Franciscan Monastery and the Church of Blessed Virgin Mary from the 15th century. The east wing of the Monastery was built at the end of the 18th century.

Pazin is also the town where the first Croatian secondary grammar school in Istria was founded in 1899. In that building today is housed the Regional Archives. 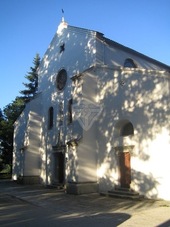 The other, bigger, 45 meters high bell tower that was built in 1705 is the bell tower of the Parish Church of St. Nicholas. This Parish Church dates back into 1266. It was a small church several hundred meters away from the castle and from 1400 till 1441 was significantly expanded. At the beginning of the 18th century other architectural changes were made on it.

In 1441 the church received the Gothic presbytery with a star like vault which was painted with Gothic frescoes around 1460.

The unknown painter painted a series of scenes of the Genesis and other Biblical scenes. The paintings are very high quality artworks and is among the most beautiful Istrian frescoes paintings.

There are some other artworks in the church’s inventory like the organ made by the famous Venetian organ maker Gaetano Callido in 1780.

It is interesting to note also the 13 coat of arms, on the apse of the church, of the families that contributed to its building: Counts of Duino, Walsee, Krottendorfer, Herberstein, Ungrispach, Eberstein, probably Cernomel and Schuel, de Pisino, Chersano, Pramperg and probably Pernstein. 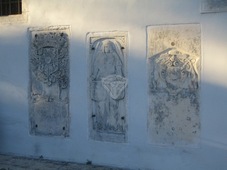 Outside the church, on the wall towards the bell tower, there are three tomb-stones of: Giacomo Rampelli (1584), abbot Giovanni Fattori (1716) and Alessio Mosconi (1560).

A part from the Pazin’s Pit natural beauty there is another natural beauty, not far away from Pazin, that is worth to be seen. The place is named Zarecki Krov. 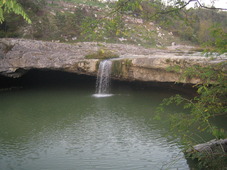 It is located few kilometres from Pazin, not far away from the road that goes to Cerovlje. Zarecje is also a home place of one of the top quality Istrian wine makers in Pazin’s area, Elvis Visintin.

Another top quality wine producer from the Pazin’s area is Ranko Andjelini from Velanov Breg. In Pazin’s photo gallery you will find few pictures of the castle and other places described above.